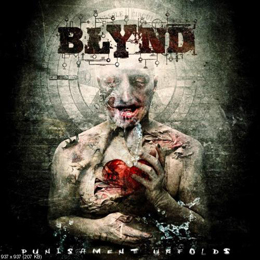 Formed in Cyprus in 2003, the band Blynd saw first light. they saw it as a personal mission to bring the starving underground metal scene on surface and to spread the tentacles of their music . Their first demo “Embraced and Abandoned” (2004) received excellent reviews from magazines and webzines around the world, such as Terrorizer Magazine scoring the demo with 8.5 and caught the attention of underground magazines witch was the start of a growing  fan base.

but not much later on they surprised everyone once again with their second demo witch defined their sound and their position in the metal scene. So I was rather curious when i got my hands on a copy of their second album witch was released last November.

The album starts of with a rather impressive intro and yes even a few great songs. But to be fair, the don't succeed to keep up the good work. Sound is awesome, same for the musicianship and skills, but lacks the power to maintain "their strength" to the end of the record.