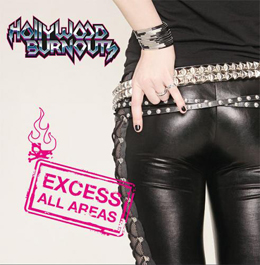 Founded in 2008 with a line-up of professional musicians consisting of lead singer/ lead, rhythm & acoustic guitarist Mike Nazzty, rhythm & lead guitarist/ backing vocalist & occasional pianist Chrizzy Roxx, bassist/ acoustic guitarist/ backing singer Vito Crash, and drummer/ backing singer Nikki Sin, Hollywood Burouts is a German act which stands for Melodic Hard Rock influenced by Glam/ Sleeze Rock (or, what else had you though, with “names” like that?) and even Blues and Heavy Metal.

Thanks to their well-received and critically acclaimed 2009 Demo and 2010 self-titled EP (which sold out of its 1000 copies in only a few months), and a reputation of being Germany's best, most successful and hardest working new Hard /Glam/ Sleeze band, HB managed to play over 150 shows prior to the release of this here, their debut full-length, garnering coveted support slots to the likes of Cinderella, Bonfire, Hardcore Superstar, Dangerous Toys, and Stage Dolls among others. Since the album's release, Crash and Sin are out of the equation, and replaced by Chris and Toby respectively. In fact, the renewed quartet should've entered a study somewhere in August of last, in order to record its sophomore album.

Meanwhile however, there's still Excess All Areas to be reviewed. Engineered, mixed and mastered by Kai Schwerdtfeger at Echolane Studio in a co-production with the band, the album contains 12 songs, of which two (“A Part Of My Heart”, which has piano played in it as well; and the album closing “Remember me”, which contains a flute passage for which no credits were noted, and even some mandarin, if I ain't mistaken) can be considered acoustic ballads. There's some short acoustics in the partially calmer “Fake Baby” as well, but overall the songs drive has a higher pace. Crunchy tunes with readily memorizable melodies, but with very nice lead and solo parts (at a certain instance even reminding of Slash), and a slightly hoarse lead singer backed by cleaner backing singer...it would've added up for an instant hit band, 25 years ago! These days, I guess the most HB can hope for is to one day be able to hop onto a national or even European tour of a somewhat established band. In order to grow out of that status, all what remains to be done for the band, is to keep on doin' what they're doin' now, and gradually grow an international fanbase. I mean, what with Internet these days, who knows...as the band says itself in the album opening track “Hands Of Rock”, there's still many people into this type of music, worldwide, and all it takes is for one of the (Californian) “hotspots” to become aware of the band, in order to invite 'em over for a couple of shows on the West Coast...or beyond! You never know, do you?

Meanwhile, check out the band at (www.) hollywood-burnouts.com (I'm sure the guys have pages on some of the other outlets, such as MySpace, facebook, ReverbNation, or Last.fm, but they forgot to mention that in either the booklet of the album, or the info sheet that accompanied the promo copy that was sent us.