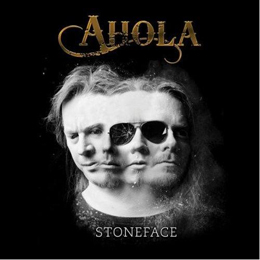 It's very possible that this band was originally started as a solo project by the artist (composer/ guitarist/ singer) known only as J. Ahola (a member known amongst others from multi-gold selling act Teeräsbetoni, super group Northern Kings, and popular Christmas act Raskasta Joulua), as the info sheet we got along with the promo copy of the album speaks of putting the age of the combo as having started in early Summer 2008, counting from when the first song (which is included in the album, by the way) was written.

At any rate, “Ahola” has since grown into a quartet consisting, besides J. Ahola, of lead guitarist Antti Karhumaa, bassist Jari Laitinen, and drummer Antti Mäkelä. Incidently, J. Ahola wrote most of the material, allowing co-writing only in two songs (“Hurricane”, co-written by one S. Tikkanen – no further info on this dude or dudette; and “Beerland”, co-written by the band's lead guitarist), but that a band feel has since settled among the people included in this project, is perhaps best displayed in the fact that some responsibilities in the album's recording were divided, with J. recording the electric guitars in his home studio, and Jari recording all drums, bass and occasional acoustic guitars (performed by J.) at Headline Studios. Vocals were recorded by one Antto Tuomainen and album mixer (and additional keyboard player) Jussi Kulomaa, with backing vocals, performed by J., Antti K and Jari, recorded by those first two.

In contrast to what one might think with an album title such as Stoneface, this is nót a Stoner album. In stead, expect a modern-day Heavy Rock with a penchant towards Metal, and soaring vocals. And I mean soaring in the way of high and powerful, you better believe it! The very melodic tunes also have an instantly memorable touch, thanks to great lead and solo guitar play and the harmonic backing vocals. Funnily enough, the album's title track IS a Stoner-influenced song (and although it kinda stands out on the album, it is nevertheless a gréat track, indeed!). But it's the ballads on the album (the semi-acoustic, semi-heavy “I Walk Alone”, and the completely acoustic “I Want You” - gee, what a tear-jerker, that one) which, according to that same info sheet mentioned earlier, shows J. from a completely different, more sensitive side.

Check this band out via their pages at facebook, twitter and MySpace, or their own website (www.) aholaband.com. If you're into that high-quality type of commercial “Rock” (the kind which still might be pleasing to those music lovers who like some underlaying complexities), then by all means dó!