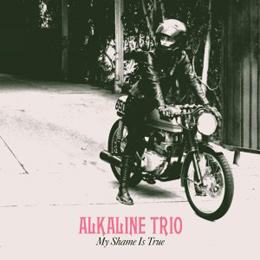 The band that will never make the same record twice are the Chicago-based punk legends Alkaline Trio. They have been around since 1996 and after having released eight full length studio albums, they're back with number nine, called My Shame Is True.
The records kicks in with the very catchy She Lied To The FBI and it's very clear that Alkaline Trio entered some new musical terrain once again, but still they embrace their classic sound. Especially songs such as Kiss You To Death and Until Death Do Us Part refer to the band's steady dark punk sound. Only Love is the complete opposite as it's very keyboard driven, almost creating a punk version of Coldplay.
I, Pessimist is also a very remarkable track, as no one else than mister Tim Mcllarth from million record seller Rise Against does some guest vocals on the song.

My Shame Is True turned out to be an excellent Alkaline Trio once again and never disappoints or bores. For nearly twenty years straight, the band has only released masterpieces. Let's hope they'll continue to do so for the years to come.