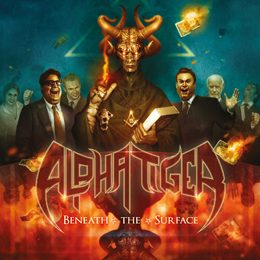 Alpha Tiger from Germany are the living proof for the fact that traditional heavy metal does not necessarily need to be created by elderly people. With their second album ‘Beneath The Surface’ this five young guys kicking rusty rockers out of their wheelchairs.

Thoroughly much celebrated shows at German cult festivals Keep It True and Rock Hard Festival the band became one of German’s hottest heavy metal newcomers. Due to epic compositions, catchy hooks and the powerfull voice of Stephan Dietrich the band succeeded in living up to the positive feedback.

On ‘Beneath The Surface’ the band successfully emancipated their selves and got rid of a lot of dead weight. Songs like opener “The Alliance” or the catchy “Crescent Moon” are only some reasons to check out this album.