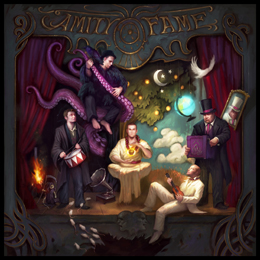 This Linz based Austrian band, today centered around lead singer Michael Bilcher, guitarist/ backing singer Filip Hörschläger, Roman Mayrhofer, and drummer Michael Kapfinger (and apparently operating both live and in the studio with guest musicians), was formed in May 2008 (then still with additional female singer Judith Schweder as extra permanent member and Wilfried Wöss as the drummer), jumped into the studio to make an acoustic version (which they promptly dubbed “Powerful Acoustic Rock”) of an already written Metal album, and released it in July 2008 through a Creative Commons licence on the Jamendo imprint.

Dinner For One subsequently became one of the most popular albums on the label, with over 30,000 downloads worldwide to date. January 2009 saw the band release its first video, for the album's title track, which in its turn went on to get over 80,000 views in the first two years. Before the band's first anniversary arrived, the band had achieved regular airplay on numerous European radio stations, appeared on music blogs and compilation albums, and achieved a #5 spot in Middle-Europe's biggest band competition International Live Award, out of over competing acts! Along the way, people from the successful German act Rammstein had picked up the album, and being charmed by it, started playing songs off it over theit PA system prior to their concerts...something which some of AIF's band members became aware of when they heard their song being played in front of 20,000 fans, prior to a November 2009 Rammstein concert in Prague. Later, an official permission was asked, which was gladly granted! Oh...and somewhere in 2009 the band released a live EP entitled Gasometer.

During 2010, the band wrote new songs, which were recorded in early 2011 [with Judith Schweder again as additional vocalist, Wöss still on the drums (later to be replaced by Markus Dörfler, whom would then leave his place for the current drummer), and Alex Zaus on keyboards and backing vocals] and subsequently self-released by the band on their sophomore album Through, on May 6, 2011. Since then, the album already received several good international reviews, videos to several songs were released by the band, and Rammstein again used several songs off the new album during their pre-concert time. In January 2012 the band signs a deal with Graviton Music Services, who re-issue the album during Autumn of the same year. Normally (if all went as planned) the band should've released an EP of previously unreleased material, somewhere late last year (but quite frankly, I have found no proof of that in my additional research on the band).

For an “Acoustic” Rock band, the guys do not quite follow the acoustic rule book, in the first place by the use of keyboards and electric bass...which are obviously both electrically generated...and furthermore by the occasional switching to electric guitar for solos and more exciting passages [check “When It Comes To An End” (a nice duet song with Judith Schweder), the closing sequence of the ensuing “Shine”, “The Kraken”, and “Burning The Witch” - there may be more, but I forgot to take notes during my listening sessions of the album]. Still, some of the actually acoustic songs find the singer going quite aggressive and this, combined with the intensity of play on the instruments, indeed give those songs a semi- heavy flavouring! For your introduction to the band's “Powerful Acoustic Rock”, check out the band' MySpace page.