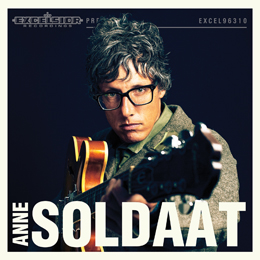 Weird name for a man, but just to make things quite clear : Anne Soldaat is a person of the male persuasion, and a Dutch guitarist and singer/ songwriter of some repute to boot!

His career started around 1990 in the guitar band Darryl-Ann, in which he and the singer were the providers of both music and lyrics. With 6 studio albums and one live album, Darryl-Ann ceased to exist in 2004. During the ensuing year, Soldaat provides musical material to The Cat-A-Day Tales project : a book (story by Aletta Schreuders, drawings by Herwolt van Doomen) accompanied by a “soundtrack” CD, and in 2007 he resurfaces with the self-titled debut album of his new band Do The Undo (which is also spelled Do-The-Undo). But apparently Soldaat is a bit restless, as next up he's found recording his solo debut album Another Life with the aid of American producer/ studio musician (and reputed singer-songwriter in his own right) Jason Falkner (known also from working with Air, Beck, Jellyfish and Daniel Johnston). Released to critical acclaim in 2009, he first toured with his own Anne Soldaat Band, and then joined label mate Tim Knol, aiding in putting the foundation of the latter's upcoming success. The guitarist then wrote music for Zout, a dance theatre show by Rotterdam's Conny Jansen Danst ensemble, before again traveling to Los Angeles in January 2012 to record his second solo album with Jason Falkner. In fact, for Soldaat doin' it with Falkner was a conditio sine qua non, as the producer knew just how to bring out the best in the songs that Soldaat had written. According to Soldaat, it was like as if the two simply went on where they left off with their previous recording session, in fact in an even more relaxed atmosphere! The duo even went as far as to write a song together, but lacked the time to actually record it.

Like on the debut solo, the material is said to be a mix of older (the oldest dating back to 2005) and more recently written songs. Not having come across Soldaat's debut album yet, I shall not contradict nor confirm the label's claims of Soldaat now seeming to feel more comfortable as frontman and taking space to experiment with structures and sounds. I will however confirm that the songs are all catchy, melodic, and slightly melancholic, and that all songs live within the realm of an overall calmer Pop Rock, which may have an emphasis on guitar works, but does not therefore necessarily exclude a going together with atmospheric keyboard play. Quite on the contrary. Still, occasionally one gets to hear some very nice lead guitar play indeed! Things may be relatively sedate to the standards of the “normal” ConcreteWeb reader, but nevertheless there's some very nice music here to be enjoyed by people with a broader mind or taste of music.

Now I've checked the internet for sites with some full-length songs off the new album, but at (www.) myspace.com/annesoldaat and (www.) last.fm/music/Anne+Soldaat you'll only find songs off the debut, so I guess you'll either have to make due with whatever samples your usual on-line sales websites (Amazon, iTunes, etc...) will provide, or get out to the local record and ask the shopkeeper to have a listening session.