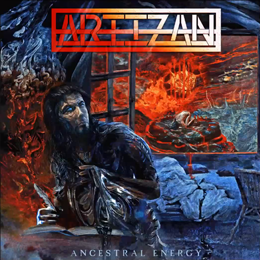 Artizan is an American five piece melodic power metal band from Jacksonville, Florida. The band was founded by drummer Ty Tammeus in 2008. Singer Tom Braden, guitarist Shamus McConney and Jon Jennings on bass joined him to start this project. Early 2010 the band got signed a Worldwide deal with German-based record label Pure Steel Records in order to release the debut album "Curse Of The Artizan" April 2011.

And now the band is back with a new record entitled “Ancestral Energy” witch is already out for almost a good month. On it, the band crafts melodic metal with dynamic song structure, dominant rhythms and melodic hooks. Or at least that is what they themselves write, and in a way I have to agree with them. It’s melodic and it surely has several rhythms and structures where you can really hear the idea behind it in. But the album couldn’t convince me despite all those elements. The problem is that there is no unity in the songs. Despite those rhythms and structures, it doesn’t sound like a band is playing but like there are several individuals playing their part after each other.