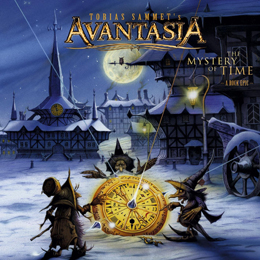 After a hiatus of almost two years, Tobias Sammet releases a new chapter in the Avantasia story.  This is the sixth album so far, and is built along the same principles as the previous five.  This is positive, in a way that you know that you’re going to get a decent piece of music, with top class musicians and vocalists, but on the other hand this also means that is adds nothing new to an existing sound.

Besides Tobias there are of course the almost ubiquitous voices of Bobby Catley and Amanda Sommerville, but the list of heavenly vocalists does not end there.  There’s also Joe Lynn Turner, but he also called in the aid of Michael Kiske and Ronnie Atkins (Pretty Maids) and Cloudy Yang  on backing vocals.  There’s even a ballad with Eric Martin, but what surprised me the most was to hear Biff Byford’s characteristic voice.

Once again Tobias delivers us an artwork, not only the music itself, but also the album cover.  Oh, and it I mention that some keyboard parts are played by Miro – fantastic stuff, and Arjen Lucassen has done an awesome guitar solo.

I cannot wait till album number seven is released….