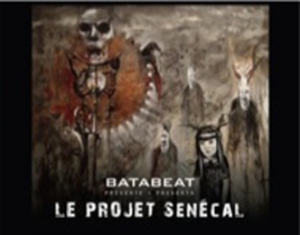 Batabeat is the musical project which came into existence after Production Planète Virgolia commissioned musical director/ composer/ multi-instrumentalist musician (his main instruments being guitar, bass, and piano) Guillaume Soucy (a graduate in classical music composition from the University Of Montreal, whom participates in a multitude of musical projects of the Montreal scene) to create a live production of ambient music for a unique art exhibition that would pay tribute to horror author Patrick Senécal.

As a result, 11 tracks were created for each of the writer's ten books (the 11th being for a web series that he wrote), with a somewhat wacky structure nevertheless. You see, what Guillaume did, was to compose 11 basic soundscape pieces (with vocal parts as well) and, inspired by the occasional creative processes in the '70s Prog Rock scene, on top of which, I'm guessing with nevertheless a certain agreement on basic ideas, a bunch of musicians would then weave additional music in a free jam session. As the musicians occasionally changed, this meant that the “end result” was therefore also changing along (except for those basic computer generated sounds, of course), and I guess people having followed the tribute over several happenings (because, you know, the music induced 'em to do so) must've had a real nice time.

For the recording of the album, Batabeat, besides Guillaume on bass and organ in one track, consists of (electric) guitarist Conrad Simon ( a native American of the Mi'kmaq tribe – from the Eastern parts of New Brunswick and Nova Scotia, and a musician with more than 20 years of experience in the international Underground Metal scene renowned for a unique composition and shredding style – was recruited by Yamaha Canada Music in 1996 to perform guitar clinics and released his debut instrumental CD Intermezzo that same year – his album The Wrath Of Con would elevate his name to cult status - ), drummer Evelyne Lange (another musician with international repute, an active drummer sponsored by Voodoo drums, and known for her involvements in the World, Reggae and Rock scene), and one Marc Couturier (a graduate in electroacoustic and digital art from Concordia University).

To say that the net result (which, due to its changing synergies and intensities is quite impossible to describe other than “freestyle soundtrack-ish”) is somewhat off the beaten track, is an understatement...and each song has a considerable length (the shortest of the 8 that ere made available to us on our promo copy only 15 seconds under 7 minutes long), allowing for those changes of pace and intensities. Best thing to do, is to check the music at (www.) batabeat.com.

If you're somewhat of a progressive music fan, or a music lover with a broader feel for music, chances are you're gonna love this as much as I did!