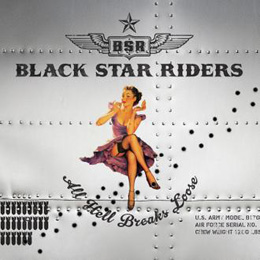 In October 2012 Thin Lizzy announced that they would not be recording new material under the Thin Lizzy monicker. The last incarnation of the band - Scott Gorham, Brian Downey (replaced by Jimmy DeGrasso), Darren Wharton, Ricky Warwick, Damon Johnson and Marco Mendoza – would be looking to form a new project. Step forward Black Star Riders…

All Hell Breaks Loose is Black Star Riders’ first album to date, and the first release under the wings of Nuclear Blast. The collaboration is most likely a good move on both sides. In a nutshell, the band have a well-established name backing them up, and basically Nuclear Blast gets the privilege of being able to say We have Thin Lizzy in our corner!

In proper Lizzy form, opener "All hell breaks loose” instantly grabs you with its hooky grooves and fantastic rhythm, while "Bound for glory" slows things down a tad but still remaining in the rocker-category. Once the celtic influenced and rather boring "Kingdom of the lost” passes, it's pretty much a constant pattern from there on. Standout ones include the aforementioned rockers, along with "Bloodshot", the robust "Valley of the stones" and "Before the war" all displaying some more killer soloing abilities by magical guitartandem Scott Gorham and new member Damon Johnson that will strike you like bolts of thunder and lightning right to the very core.

Honestly, as much as I am pleased to see the band back in action again, I have to say that most of the tracks on this album did not really make as much of an impact on me as I had hoped. Let’s face it : Phil Lynott was/is God. It is not a BAD album by any means, but I guess I just expected more, especially after waiting 30 years for it. However, it is a good hard rock release, but just not what I would class as being anything comparable to Thin Lizzy’s previous works. Still, if you like a good melodic hard rock-sounding album, you should be pretty happy.