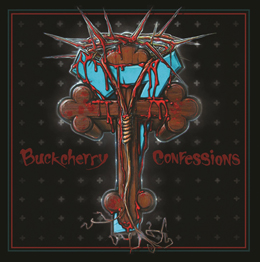 Finally, the wait is over! Twenty years in the business, the LA rockers of Buckcherry are back with their sixth full length studio album, which goes by the holy name Confessions. Now that I have your attention, there's no real secret to it. The entire album has been inspired by the seven capital sins, referring to frontman Josh Todd's childhood. In addition, on Confessions, it's time for Buckcherry to confess what they've been up to these last months/years. Well, quite clearly they've been writing some fantastic hardrock and that's a fact!
From the opening track on, you get blown away by the amazing hardrock sound that only an American band like Buckcherry can represent. Gluttony is bone hard, solid and takes you on a ride of nothing less than thirteen songs. In between, of course, we are treated to a pause to gasp for air during the emotional ballad, entitled The Truth. The entire album sounds exactly what we're used to of Buckcherry (and maybe even something more). Confessions sounds very cheerful, but Buckcherry have wonderfully added some darker tunes in songs such as Water and Greed.
Are you a fan of hardrock? Confessions can't be left out! Buy that new Buckcherry baby and get blown away!