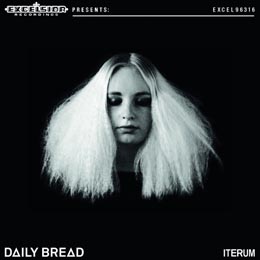 Oh boy...has it really been 3 years since the release of this Leewarden based Dutch band's debut album Well, You're Not Invited (review by yours truly, posted 23/11/2009, is still available for your scrutiny and fact-finding needs in the “Archive” section of this here website)? Makes one wonder what took singer/ keyboardist Kimberly van der Velden, bassist Chris Mulder and drummer Stefan Stoer so long, doesn't it? Well, luckily the info sheet that came along with the promo download of the album starts off with explaining just that!

You see, during the writing sessions of the sophomore album, the trio had decided that they wanted something different from their Sexy Garage Dance of their debut, and so they started experimenting somewhat. Mulder had been listening a lot to New Wave and Chill Wave music, by bands such as Joy Division, M83 and Com Truice. The music being new to him, he really got caught into it, and was looking forward to making his own version of that kind of music. However, he didn't really make a lot of it, which was somewhat frustrating. Eventually, songs were written, a release date had been set, and the studio was already booked.

Then, in early 2012 the band decides to hire keyboardist Atser Datsma on a temporary basis (as Kimberly was recovering from an operation on her fingers) and the band started making demos. Although the original members initially felt awkward about breaking their “holy trinity”, the first sessions with Atser were so positive, that then and there the decision was made to continue as a foursome. However, besides the fact that Kimberly could now concentrate more on her lyrics (which were always intended to be of a poetic nature), Atser's contributions also brought a new energy/ synergy to the band! A decision was made to throw away the demos, cancel the studio, and head out to Excelsior Recordings' headquarters for what the band thought would be a very difficult conversation. To their surprise, the guys at the label understood, and even supported the band in the search for their new musical identity. Enthoused by the fortunate turn of events, the band swiftly set forth making some demos and, not wanting to wait for the official release, decided to make a free release entitled The Present at the end of March. The new sound was appreciated, and during April and May the band was dubbed “Serious Talent” on Dutch national radio station 3FM. Meanwhile, work was continued on the full-length album with producer Rimer London.

The album's title, Iterum, was chosen for a good reason; taken from the latin for “again”, or “renewed”, it indeed shows the band with a new sound, which is at the same time still very much Daily Bread (no pun intended). Oh yeah, the quartet gives the whole New Wave/ Chill Wave a thorough DB colouring indeed, and the end result is very much something which could only have come from thém! In a way, the guys still play “Sexy Dance” music, but have upgraded the “Garage” bit to “Wave” (with still frequently sporting quite some energetic fuzz bass, you know!). A stylistic surprise comes with the overall calmer (only piano and some sparce percussion accompany the relatively calm and somewhat melancholic vocals) album closer “You Have Become”. In case you're interested, the songs' lyrics are an ode to love, freedom, and life. But also they relate about the daily troubles, how you get sucked into them, and how you try to get away from 'em. For your initiation to the band's new sound (in as far as that hasn't already happened, seen as the album's been out for a couple of months already), check the couple of songs available in the “Media” section at (www.) dailybreadtheband.com (further links to the band's BandCamp page might get you even more music!).