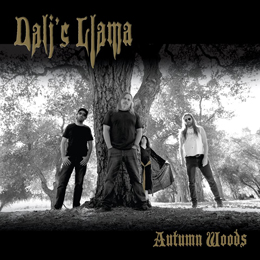 Dali’s Llama. from Palm Springs, CA have been around already for two decades, and still their mix of stoner, punk and bluesy metal manages to win me over. Dali’s Llama certainly have used more originality with their band name than with their sound, but from the opening track “Bad dreams” onward, it's perfectly clear that we are in the presence of a quartet who know how to transform themselves into a sonic bulldozer that's doing anything but taking prisoners. Dali’s Llama have taken distance from their sixties garage roots (check out their previous album Howl do you do)and veered again in a more stoner rock inspired direction. The songwriting allows parallels to artists like Motörhead, Kyuss, Fu Manchu, Sleep, Four Horsemen and the likes. And where they are anything but original, they convince with solid songwriting, fat production and a devastating charm.

The songs are all quite upfront, are never too demanding and stick with you right from the start. They are never sounding too brutal or extreme, but neither are they ever acting too tamely. While the voice of Zach Huskey shows close parallels to Totimoshi’s Antonio Aguilar , the guitar leads and solos often recall good, old Fatso Jetson and Tummler. Towards the end, the unusual acoustic “Resolved” amazes with a great Neil Young-ish setup.

Fans of Man’s Ruin versus Smallstone versus Fuzzorama who cherish a fat production (by my fave bass player Scott Reeder) should check out Autumn Woods, already the tenth long player by this American band that leaves no doubt that they are doing exactly the music that they love.