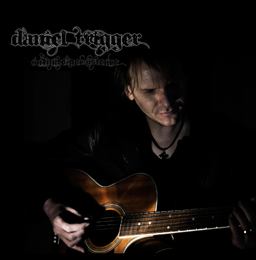 London Planetarium, 1989 : a young fellow from the Midlands (in other words, do not confuse with the Russian Death Metal band Trigger, who released a full-length debut entitled Apocalypse Tomorrow on NitroAtmosphericum Records in 2012) by the name of Daniel Trigger attends a laser show at the, where Europe's “The Final Countdown” is used as a musical backdrop for the show. Dumbfounded by what he hears, a decision is made to start making music which would sound just like that. Starting his first band at age 15, he stepped up to the microphone, and never looked back since.

Well, not quite, because there's been cause for reflexion when the lad was about 19, when the combined situation of singing on lo-fi equipment in poor rehearsal rooms for months on end took a nasty toll on Daniel's voice. Upon consultation of an ear, nose & throat doctor, he was told that he'd better stop singing all together. Six months of intense speech followed, and after that Daniel showed persistence for his passion by getting professional singing lessons for the next 4 years. As times went by, he also had tenures with several bands, the most notables being Heavy Metal outfit Full Tilt and Blues Rock act Easy...but in all those bands Daniel usually had to water down his own musical ambitions. No surprise then, that in 1997 and 1998 Daniel released his first two solo albums Believe In Me and Wheels In Motion, a third one (entitled Full Circle) following in 2003.

Eventually Daniel's idea to form his own band (as opposed to joining one) was fulfilled when in 2003 he recruited Sally and Jezz Trigger for female vocals and bass duties respectively, as well as guitarist David D'Andrade and a drummer of which I was unable to find the name. With Daniel also providing keyboard sounds, he was now not only able to bring his songs to a live environment, but also succeeded in already releasing 4 albums (2005's Call To Arms, 2006's Fight The Machine, 2007's Dawn Of A New Knight, and 2009's Furious Times) under the shortened monicker of Trigger (which apparently ceased to exist in 2011). During Trigger times, Daniel won a prize in the category “Best Singer/ Songwriter” at 2005's Midlands Guitar Hero competition. Important events for the band itself include selling out the 300 capacity Artrix Theatre in Bromsgrove, having had a song used in a movie, having songs played on local, national and international radio, and having performed in front of 22,000 people at a town festival. Important to know, is that those albums were recorded in Daniel's own studio, which he built in a frustrated reaction to having spent far too much money on crappy production work in the past. A studio which (along with his experience in the field), he puts at the (paid) disposal of up and coming bands. But enough about that (wink!), it's the music we're supposed to talk about here.

You see, whereas Daniel's original songwriting geared him in a direction of Bon Jovi and Guns N Roses, he later broadened his style to areas such as Pop and Dance (on his website you'll find a couple songs arranged in different styles for comparison), and with Trigger he's covered songs from the elite of Melodic Hard Rock, including (besides the bands mentioned at the start of this paragraph) AC/DC, Journey, Led Zeppelin, and Queen. But in the case of this 4th solo album, Daniel preferred to go for a muscular type of Hard Rock which, besides displaying influences from Guns N Roses and modern-day Europe, also shows elements from Alter Bridge. One thing you will immediately agree on upon hearing the material (check the album at bandcamp.com) is that Daniel's is a powerful voice. In fact, so powerful it is, that it even brings power to what is supposed to be a piano ballad (album closer “Last Breath”)! Now this album took two years to complete, and perhaps that's why Daniel's former bandmates in Trigger (Sally & Jezz, as well as David) are still featured on it, alongside drummer Jerry Sadowski and second bassist Adam Bennett. Somewhere in the footnotes, it is mentioned that the album came at a critical moment in Daniel's life (hence also the title). Most probably the (at least partial) demise of the band? Personally, I feel he should've chucked out any participation by Sally, because hers is a truly annoying high-piched voice, which quite simply gives me unpleasant chills along my spine most of the times she opens her throat. Luckily, that's only occasionally on the album! The guitarist is a keeper though! Nice sort solos and lead parts over powerful and catchy riffs which are at some moments holding a middle between Groove Metal and...Black Sabbath, and at other moments come a bit closer to modern-day Melodic Rock. And underneath there's the occasional support by Daniel's keyboards.

Nice job...check it out if modern-day Melodic Hard Rock with powerful lead vocals is your thing!