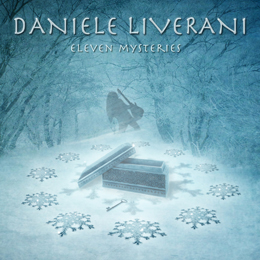 Perhaps better known for his contributions on the keyboards and being the mastermind behind the likes of Twinspirits, the Genius Rock Opera, Cosmics and Khymera, Daniele Liverani is also a guitarist of some considerable skills, which he sufficiently proves with this 3rd instrumental album, delivered under his own name, on which he again plays the guitar.

Actually, on his first “solo” album Viewpoint (issued in 1999 through Virtuoso Records), he also handled the keyboards, and on sophomore solo album Daily Trauma (2004, issued through Frontiers Records) he handled also the keyboards ànd the bass. This time around, he only played the guitars, relying for the other instruments on three new musicians he's discovered in the last couple of years : keyboardist Marco Zago, bassist Tony Dickinson, and drummer Paco Barilla. Although in essence an instrumental album, the majority of the tracks nevertheless contain either vocal samples or (more frequently) spoken word parts (in one instance done through vocoder). That all musicians are Grade A artists at their instruments, will be indubitably ascertained when you'll listen to the eleven shards of music, which gears from somewhat sharper-edged Shred, over more melodic Metal tracks, to almost cinematic stuff...but a degree of Progressive is always there!

An album both for lovers of guitar music, as those simply into good music! Liverani has a webspace of his own, as well as a MySpace and YouTube, so check out those sites for an audio/ video introduction.