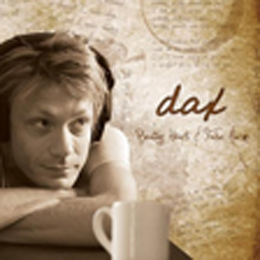 The artist known as Dax (which is short for Dax Penick) comes from a family in which musical talent is not unknown. His cousin, Skeeter Davis, for instance is still wildly popular with millions of adoring fans in the Country music genre.

So, it was no surprise that she was a big supporter in Dax' decision to start a career in music. And, then still based in his native Southeastern Indiana, Dax went through the several motions of the struggling singer-songwriter musician whose wish it is to make music his main means of livelihood. From releasing albums on an independent base, to playing up to 150 shows per year and even making his own videos, he did it all, only to find further progress to be impossible in his part of the world. Realizing that a change was needed, he eventually listened to the advice from Paul Worley (of Lady Antebellum and Dixie Chicks fame), and moved to Nashville in the Summer of 2010. The past set aside (I was quite unable to find any info on Dax' musical exploits prior to his relocation), Dax' first work was to search for the right kind of producer, as he was convinced that if he ever was to be enabled to work on a professional level, he would be able to bring out exceptional material. One day, at a meeting with another producer, Dax met Grant Craig, with the intent of doing some co-writing together. The first result of that co-write, the song “Run And Hide” (which happens to open this album here), immediately convinced Dax that he'd found the producer he needed.

The result of that collaboration (Dax doin' all lead vocals, playing acoustic and electric guitars, as well as some piano; Grant playing most bass, some guitars, all keyboards, and adding occasional ukelele and mandolin, as well as some programming; one Jonathan Dimmel taking on all drums duties, and a Michael Ronstadt taking care of all cello when needed – further guests on the album being bassist Brad Dance on “Impressionist”, and violinists Bob Bentle and Kyle Aaron featuring on “Impressionist” and “The Painter” respectively) is now awaiting my critical appraisal, and I must say that over the course of the several listening sessions I gave the album, Dax succeeded in charming me with his material which, inspired by the music of the likes of Pearl Jam, Days Of The New, Kings Of Leon, U2, and The Darkness, is quite a varied lot of songs, ranging from Classically infused Pop to Country flavoured ballads, and from mainly acoustic stuff to more heavy guitar-driven tunes...all of which still have a certain Pop sensitivity! Lyrically, I will confess there' IS a poetic side (as claimed in the bio we got along with our promo copy).

To get a whiff of this guy's musical talent, check out what's available as audio or video at (www.) daxofficial.com and (www.) myspace.com/daxonline (there's also pages on twitter and facebook). By the way, the promo copy wé got is a 10-track affair, but in the info on Dax' website I read that the album is to be re-released as a 12-track album...with bonus track. Possibly, the latter will include Dax' version of Skeeter Davis' “The End Of The World” (a video for which was already released), as a tribute for the 50th anniversary of Davis' original release of the song. So, by all means, if the audio material you come across at the aforementioned sites charms you as much as they have me, try to get the more recent version of the album.