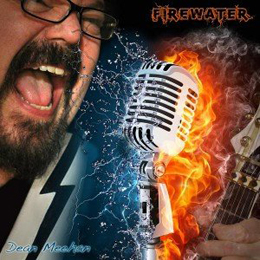 Dean Meehan is a Canadian (from Niagara Falls, Ontario) whom has been working in the music business for over 25 years now, both as a musician and behind the scenes with bands such as Blue Rodeo, Kiss, The Rolling Stones, The Tragically Hip, Great Big Sea, Kim Mitchell, Three Days Grace, Tom Cochrane, Matthew Good, The Guess Who and Saga...to name but some of the better known.

In that time, he has also released 3 solo albums [about which I however found no trace at all during the short Internet visits I was able to make in preparation for this album (ach, relatives...they dó come in handy occasionally, don't they?! Just a joke...you know!? - Oh, wait...there's mention of the man's first album Original Symphony in the info sheet (no release date mentioned)...and I found out he released an SOS album entitled Save Our Souls in...in 2005?] which gave Dean some Canadian airplay during the '90s. When on stage, Dean (playing guitar and singing) is backed by lead guitarist Rob Gabriele, bassist Hank Janzen, and Dean's brother Wayne on the drums...but for this album, which was recorded, mixed and mastered from 2005 to 2011 in different studios (Ironbored Studio in Niagara Falls, another studio in Hollywood, California, and a third – also unnamed – studio at Mandaue, Cebu, Philippines), he did almost everything on his own...the exceptions being guest appearances on extra guitar by Saga's Ian Crighton on the album opening title track, and by Chris Frame (also known as Het Riani – of YouTube fame) on the track “Sick”.

Generally speaking, all songs fall under the monicker of “Melodic Metal”, but with a good Hard Rock basis...which at the end of the '80s music lovers would simply have dubbed “Heavy Rock”. Dean himself puts it quite clearly in one of his songs : “I owe it all to Motley and Kiss” (that song also contains a clever rip-off of riffs from Kiss' “”Shout It Out Loud” and Crüe's “Shout At The Devil”)...which immediately typifies the music. Would be interesting enough, if it wasn't for the fact that the guitar sound is somewhat unilaterally sharp throughout the album, and Dean using the same lead vocal style on each and every song. Thank god for the backing vocals, which in a couple of occasions (“Dead Girls Don't Cry” and album closer “Give And Take”) finds Dean wondering off into Beach Boys' vocal harmonies territory.

Not a bad album, when this is actually your thing, but 16 songs of almost-the-same is a bit much for this here veteran in Rock music. Don't take that wrong now! I can enjoy any part of the album for at least half an hour (and you can really jumble together any 10 songs on the album, with or without the somewhat more “commercial” songs ”Man The World Forgot”, “Blasted In Beverly Hills”, or the aforementioned songs), but 51 minutes of quasi-the-same recipe is a bit much. For your convenience, you can listen to all songs (or at least samples of 'em, I guess) at (www.) deanmeehan.com.