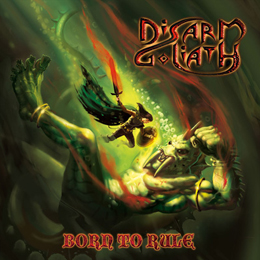 Disarm Goliath is a band from England, who released their first full-length-album “Only The Devil Can Stop Us” in 1999. At the beginning of this year they released their second album “Born To Rule” on their own private label. Now Pure Steel Records have decided to make a vinyl-edition of this heavy metal album.

The album opens with a scream, which reminds you of Grim Reaper’s “Rock You To Hell”. On this album you will find simple, but very gripping riffs, analog drums and a powerful singer. Steve Bell changes between clean and high- pitched vocals.

Disarm Goliath came with a nice album, but for me it didn’t get higher than average.