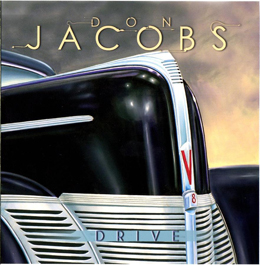 Born and raised in Mississippi, where for some art, literature and music are a way of life, Don Jacobs is a relatively successful visual artist (painter), muralist, and graphic designer, whom also has a psyche rooted deeply in Rock music, and a fascination for songwriting, which he brought to fruition in his first band as a teenager.

After high school, he left his home state in the US for the better part of a decade and, during his European art school days, connected with Scottish musician Tommy McClymont, whom had similar tastes in music. Bouncing musical ideas off of each other, they played the pub scene, and eventually recorded a handful of their songs in an actual studio. Conditions, regrettably, were of a nature that the twosome never got to record any more of their material...and then Jacobs eventually returned to Mississippi, building on his local reputation as a visual artist. Eventually, he felt time had come to bring that old musical material back to life, and home-recorded a full-length of songs, which was self-released in 2009 with the title Late Night Radio.

Then, one Virgil Brawley, old friend with whom Don had formed his very first high school Rock band (see also first paragraph) had returned into Don's life. Having struck out on his own, Virgil made a name for himself as a Mississippi Blues artist, both as a solo performer as well as with his band, the Juvenators...and hearing the material Don had recorded in his own home, semi-convinced the latter that it was time to get those songs into a proper studio and record 'em properly, offering at the same time to act as producer. At first, Don wasn't too sure, but Virgil took things in hand renting the Route One Recording studio in Monticello, MS, before letting Don know. Well now, Don didn't have the heart to say no, and so things came to happen anyway! In reflection, Don figures it was the right decision after all!

So, off to the studio it was, and what eventually got recorded are 9 songs which he originally co-wrote with McClymont, 2 which he wrote on his own, and two which he co-wrote with one Helmut Diefenbach (one of which, entitled “Go To The Islands” got extra input from Brawley). Now, the way I see it, the album was recorded in two sessions, with a different set of “guest” musicians. James Jenkins appears as drummer on 6 of the 13 songs (and he brings additional percussion to a 7th song, the aforementioned “Go To The Island”), and those same songs all feature bassist Dee Lawrence. On most of the songs which feature drummer Nick Bridge, he's supported by bassist Tyler Bridge, the one exception being the song “Something Has Changed”, on which Tyler's spot is taken over by one Hendrik Bertram. Two constants, appearing on every song, are guitarist Nick Smith (also a co-engineer of the album) and keyboardist Chalmers Davis. Then there's guesting saxophone player Jim Pierce, whom appears on 6 songs (2 from the Jenkins sessions, the others on the Bridge sessions), one Ricky Brown brought second guitar to “A Lot On My Mind”, and eventually Brawley himself played extra guitar and did backing vocals on “The Rain”.

Stylistically, what's played on this album is a singer-songwriter's Pop with Rock background...or a Rock with Pop sensitivities, depending on how you look at things! Stuff which needs multiple listening sessions in order to fully get into it when you're not absolutely completely into that style of music. You can get an ear-full of Don's music at (www.) myspace.com/383614537. By the way, album songs featured there are “Lincoln County” and “I Wish You Were Here” (both of which featured in two versions), plus “Africa”, “A Lot On My Mind”, and “The Rain”, with “Late Night Radio”, “Jim And Louise”, and “I'm In Love” (probably off that self-released 2009 album?) as bonuses. Which do not paint Don's musical pallet quite completely as, for instance, “Go To The Island” has an almost Jamaican feel to it (I'm sure I cannot explain exactly why)! Overall, this is very nice laid-back music to use as a background during family barbeques...or on hot Summer evenings, when you're enjoying a nice cool lemonade out on the porch!