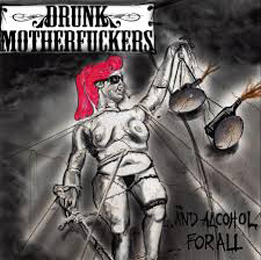 Based in Athens, this Greek Stoner/ Doom/ Southern Rock quintet has been true to its name, spreading its alcoholic propaganda since late 2008...

...but the band's lineage actually goes back to 2004, when singer Father W started the band the Drunk Earth as a side-project. Playing a hybrid of Crust, Punk and Sludge Metal, the outfit recorded a tape EP entitled Returnable Bottle, which was released through Fistbang Records on a limited rotation of 300 hand-numbered copies. The band's line-up was however quite unstable due to some members' personal reasons, and so the band's activities grinded to a halt.

A word about "Father W". As mentioned in the previous chapter, the Drunk Earth was a side-project for him, and indeed the man's prime activities in those days lay with the band Dodsferd, a Black Metal act which had been active since 2001 with some relative success (delivering to date a total of 2 demos, 6 split releases, 8 full-length studio albums, one compilation, and a live record), and in which he operated under the name of Wrath, apparently also playing second guitar. Prior to starting up DMfs, Wrath actually went into several side-projects, all of which in the Black Metal genre. First was the solo effort Kampf, which to date only released a 2006 demo. In 2007 he went into two side-projects at the same time : Grab (as singer) which released a split and full-length album in 2008, and Nadiwrath (again as singer) which so far produced a demo, a full-length, and splits with Hexenmaister and Dodsferd. Yet another side-project was started in 2008, this time a more atmospheric Black Metal act named Mortovatis, in which he plays the guitar, and which so far released a 2010 split with Dodsferd.

Eventually however, Wrath rekindled his "drunk" project of old, got together with drummer El Pedro Garcia Escobar and three other members (two guitarists and a bassist, obviously) and started Drunk Motherfuckers, opting for a more streamlined type of music which was a hybrid of Stoner and Sludge. This initial incarnation of the band recorded an acoustic EP entitled Drunk And Wasted (which they self-released on 666 hand-numbered copies in 2009) as well as the song "We Ain't Give A Shit About Sobers", which was included in the double compilation album Miss Fortune Is A Henhouse Manager, released through Spinalonga Records in 2010. 2010 was again a year of change, as the line-up was almost completely overhauled, with only Father W and El Pedro Garcia Escobar remaining. New members were guitarists Andrew and Wee, and bassist Soulis. And this (Soulis would be replaced by Manour in 2013) is the line-up which, in different sessions between November 2010 and July 2011, recorded the band's debut full-length at Class Studio, with help from George Verikakis, Labros The Ace, Johnny A. Echo...and Wee!

No need for me to go into the sound of this band, but lemme just say that Father W's vocal styling is quite different from tat in his Black Metal ventures, as for Dmfs, he takes on a somewhat medium-high pitched wail, which goes very well with the music indeed! In the “Band Profile” section of the band's official website (www.) facebook.com/pages/Drunk-Motherfuckers, you'll find full-length versions of three songs off the album alongside the aforementioned “Ain't Give A Shit About Sobers”. The band also has a page at ReverbNation (link on facebook, expect the same info) and MySpace (which I could not open due to the browser on my network PC on which I work to retrieve info not being supported – why the fuck do those sh*****ds at MySpace always have to upgrade, goddammit...they have a deal with Micro-fuckin'-soft, or what?).