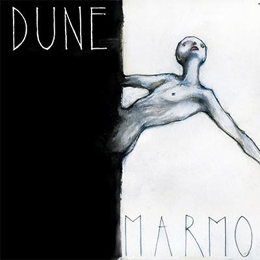 Having started as a Bologna (Italy) based guitar-drums (guitar = Michele, drums= Giovanni) duo in 2006, D.U.N.E. grew to a quartet including singer Alessandro and bassist Nico (native of Barcelona and Toronto, but I ain't sure to whom which place relates), which released its debut 12-inch vinyl release L'Ipotesi Della Stipsi in March of 2008 through several labels (including Wallace Records, but with licencing to Shove records, In Limine, Neat Is Murder, Sangue Dischi and Donnabavosa), securing a moderate distribution throughout Italy.

The members, being or having been in such bands as Laghetto, Marnero, Summer League, Revolution Summer and Grindine, meld their influences into something which is a crossbreed of Post-Core, Post-Rock, and Psychedelic Space Rock, and which works around somewhat minimalistic yet effective and repetitive structures. The vocals (in Italian, if I ain't mistaken) are screamed for the most part, although some spoken word inclusion and a calmer vocal part exists in a couple of the songs. In a way, one could compare this to a simpler Italian version of Voivod. In fact, there's a good reason for that, as D.U.N.E. also brings a cover of Pink Floyd's “Astronomy Domine” (not surprisingly, Ale's “normal” voice is a somewhat medium-high pitched one...but he also uses screamed vocals on the track – great work on the guitar, by the way!). With a length of 4:08, that is the longest track on this EP, as the 6 other songs on the EP vary in length between 2:13 and 3:43 (with an average of 2:47)...in other words, relatively short tracks altogether. Still, a thing to be enjoyed by all those into that specific kind of music (myself included).

The original release of the 10-inch dating back to early 2011, D.U.N.E. Has meanwhile already released a new, self-titled EP (also available on CD) including 3 new tracks (one of which just under 2 minutes long, but the others lasting almost 5 and 7 minutes, making for a total listening experience of 12:34). Highly recommendable for anyone into mind trips! In my case, an absolute must-have, and therefore a needed addition to the 2012...euh...2011 year-lists!