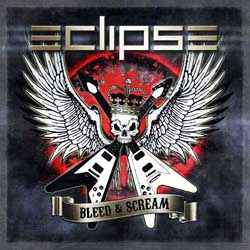 This album is an album that might make some of you starting to feel a bit nostalgic about decennia that have long since passed.  With this I mean that this album seems to have its roots back in the eighties.  Just listen to the fourth song ‘Batllegrounds’, and I guess that anyone who was musically aware in the eighties, will immediately say that this song was inspired by ‘Over The Hills And Far Away’ by the late Gary Moore.

Eclipse released their first album ‘Are You Ready To Rock’ back in 2008, but I seem to have missed this album altogether.  What I didn’t miss however was the W.E.T. project, in which both Erik Martensson as producer, and Magnus Hernriksson took part.  Erik Martensson has also been writing songs for lots of other artists, like Toby Hitchcock, Jimi Jamison, Giant….

This maybe isn’t the best release of this year, but it’s not far off.  The songs are catchy, the vocals are very good, and the music balances somewhere between hard rock à la Pretty Maids, and more AOR-esque music à la W.E.T.