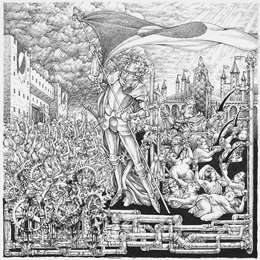 This band was created in 2010 in Brooklyn, NY. This is their debut album, and a rather strange album it has become.  It is hard to fit their music in a certain style.  One moment you’re thinking you’re listening to a band that has been influenced by The Pixies, but a bit later it’s like you’re listening to a grunge or post-grunge band.

Sadly it’s not my cup of tea, this style of music. What puts me off are the vocals. I don’t like this particular kind of singing, and besides it’s repeating itself too much.  The music on the other hand has it’s ups and downs, and there are songs which rather pleased me, but the end verdict remains negative.