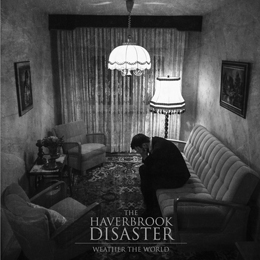 The Haverbrook Disaster from Germany is a relatively new hardcore band which is about to release its new record, Weather The World.
They already convinced many hardcore fans with the release of their split EP with Demoraliser, but they will do so once more with this new full length. Every part of the album is placed in such an accurate way, that it meets every expectation. The biggest difference between their EP and Weather The World is its use of melody. Weather The World runs over with melody.
On the fifth song, The Chosen Few, Stick To Your Guns frontman Jesse Barnett even joined the band to do some guest vocals.

Weather The World turned out to be a good hardcore album, nothing more or less. Definitely one of the better albums of this year. Catch The Haverbrook Disaster on their upcoming tour with Stick To Your Guns, First Blood and Hundredth.