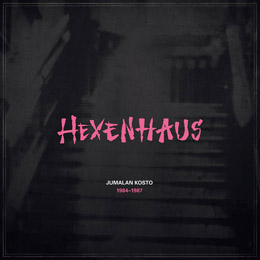 With the Finnish Hexenhaus (do not confuse with the Swedish Thrash Metal band by the same name; founded by ex-Candlemass guitarist Mike Wead in Stockholm during 1987, thàt act left us the albums A Tribute To Insanity in 1988, The Edge Of Eternity in 1990, Awakening in 1991, and the comeback album Dejavoodoo in 1996 – but failing to garner the former success then dissolved for good; morphed into the short-lived Memento Mori in 1992, adding former Candlemass singer Messiah Marcolin to its line-up), Ektro Records reveals to us a rare jem of the mid-'80s Post-Punk scene of their country.

The 3-piece band apparently took its musical lead from the likes of Virgin Prunes, Bauhaus and The Ex, and lived from 1983 to 1987. During their lifetime, they brought out several demos, the single Ikiyo/ Katakombi, and contributed a song to a compilation EP entitled Antakke Leipa. A second single was recorded, but never released. It's from that material that the label has compiled a truly interesting 15-track compilation full-length (lasts almost 47 minutes).

As you may have noticed, the song titles are in the fellows' mother tongue, and so are the lyrics/ vocals...giving the material an extra “exotic” feel. You can listen to two tracks at (www.) ektrorecords.com (just scroll down the page to find the short article about the release to find the links for the tracks posted on Soundcloud), but keep in mind that those two tracks are only representative for the more introverted side of the band, as they also had a more exhuberant side to 'em with both more energetic music and vocal stylings. In order to discover thàt, I guess you'll have to get hold of a copy of the album. At any rate, if the above mentioned comparisons have sparkled your interest, then this a must-buy album of historical importance!