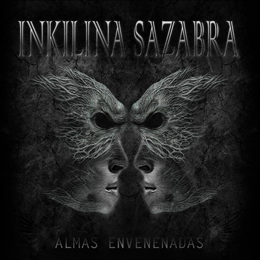 This is a Portuguese industrial rock band, created in 2010 by the multi-instrumentalist and songwriter Carlos Sobral and the writer and lead singer Pedro Sazabra, the only permanent members. They released their first album “A Divina Maldade” in 2011 and will release their new album “Almas Envenenadas” in July.

During 2010 Carlos wrote and record the songs from their debut album, using all the 15 chapters from the Sazabra´s 2nd book. The 1st single “A Divina Maldade” was self-released in December 16, 2010 and the album (with the same title) was self-released in February 19, 2011. Both were well received and received very good reviews. In June the band gave their debut show at MetalGDL fest featuring Sazabra on vocals, Carlos on drums, programming and backing vocals, César Palma on guitar, Paulo Dimal on keyboards and Alexandre Dale on bass.

So basically, when you buy this record (and you don't speak Portuguese) you won’t understand not a single word of what these guys are singing about. Kudos for not doing what everyone else is doing and singing in English, but yeah, Portuguese isn't that easy to understand. The music itself could be better in my opinion. It is industrial, ok but then it still doesn't have to be repetitive. And to be honest this record sounds more like a person who is just giving a speech with the support of a key board.