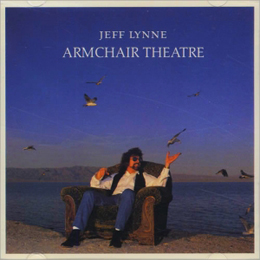 Jeff Lynne is best known for his work with Electric Light Orchestra, shortened ELO.  But he has also done some solo work, and this is where ‘Armchair Theatre’ comes from.  This Frontiers release actually is a re-release of an album that has been out of print for a decade or so.  Frontiers have added two previously unreleased tracks however.

The list of special guests on this album is enless, but to name but a few of the best known : George Harrison, Richard Tandy on the musical side, and Tom Petty, besides a lot of others, on the writing side.

The first time I played this album I admit I didn’t like it.  This being mainly due to the fact that knowing what Jeff does with ELO I think I had expected something that lay in the same vein.  And to a certain degree is was, but it also sounded a bit like a mix of Tom Petty, The Travelling Wilburys and a little bit of The Beatles mixed in. Which is no surprise, since not only did Jeff produce George Harisson’s ‘Cloud 9’ album, but also the debut solo album from Tom Petty ‘Full Moon Fever’, and was part of The Traveling Wilbury’s together with the two aforementioned artist, band that was completed by Roy Orbison and Bob Dylan.

However when playing it a second, third, fourth time, this album started to grow on me.  It’s not a rock album, but it’s quite agreeable, easy-listening music, performed by a bunch of excellent musicians, and Jeff’s voice is exactly the right medium to bring this type of music.