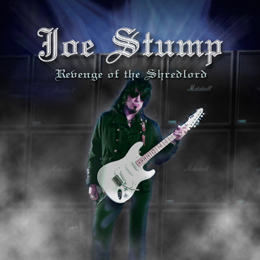 In the world of the guitar loving music fan, Joe Stump is hardly an unknown entity. Following the release of his solo debut Guitar Dominance (issued through Leviathan, to which Stump would remain signed for the next 10 years), the guitarist issued another instrumental album (1994's Night Of the Living Shred) under his own name, before coming out with the 1995 debut album Light In The Sky of his vocal band The Reign Of Terror (not to be confused with Reign Of Terror – 2 US bands known by that name, playing Death Metal and Death Metal with Hardcore elements – and an Australian band which played Thrash Metal with Death influences). In the following years, Joe would alternate vocal and instrumental albums, and in 1997 a third project by the name of Shooting Hemlock would see yet another album to which the prolific guitarist contributed. Meanwhile, The R.O.T. has ceased to exist, having delivered a total of 4 albums, and S.H. delivered the 2010 album Big Green Monster. In 2005, Joe started a new vocal band under the name of HolyHell, which to date self-released a split-EP with Rhapsody Of Fire in 2007, followed up by the 4-track EP Apocalypse (issued under Magic Circle Music that same year), the self-titled full-length in 2009, and a new 4-track EP entitled Darkness Visible – The Warning in 2012 ( the latter 2 again issued through Magic Circle). Somewhere along the line, Joe also played guitar in the band Raven Lord, but at present it is completely unknown to me whether they ever released anything.

At any rate, this is the 10th studio release under Joe's own name (not counting the 4 compilations, and a live album, okay!?), and the 3rd for Lion Music (colleague Cosmicmasseur had a review of the previous album, Virtuostic Vendetta, posted on April 19, 2009 – the album befóre that dates back to 2004, and a review of that therefore cannot be found in this website's archives, as everything before 2005 got lost in a severe computer crash)...and as per usual the listener is treated to the finest collection of Shred Metal tracks, which never fail to contain catchy melodies, and which are occasionally alternated against more sensitive moments. On this album, for instance, Joe brings a short (only 96 seconds in length) acoustic diddy entitled “Master's Prelude” (actually an intro to the ensuing in The Master's House”). For the rest however, expect splattering guitar work played at high pace, occasionally enhanced with organ-like keyboards (played by Rock Jetstream, and a guest appearance by Fransisco Palomo). On the drums, we find one Hector “Blaster” Jaramillo (formerly of a band called Kaala), and the bass is played by Joe's old pal Jay Rigney (was also in The Reign Of Terror, Raven Lord, as well as a former member of Obsession, and a current colleague in HolyHell and Shooting Hemlock).

Find music (if any) at (www.) joestump.com, (www.) facebook.com/JoeShredlordStump...but be prepared to have your face melting off during your listening sessions.