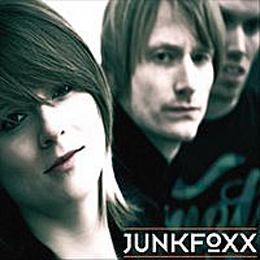 Not a lot of info on this English band, because the trio from the Essex region is only a young band, formed in late 2011 when, on December 19, singer/ guitarist Nathan  “Papa Justify” Lusher and singer/ bassist Julia “Okra” Clark held an audition to incorporate Dan “Bongo Spud Gun” Brown into their band as drummer.

With material written by the first two, the band first spent a couple of months rehearsing, and in May 2012 entered Big Noise Studios in Rochford (Sussex) to record 4 songs with Simon Davies (known from releasing the Critical Mass album under his own name, contributing as guitarist to the AC/DC tribute band Dirty DC, as well as from various soundscape music – an accomplished Blues Rock guitarist with a history spanning three decades), whom also mixed the material.

Stylistically, one might say that Classic Rock with a Blues touch is put in a modern jacket, finding Nathan and Julia alternate on lead vocals (with the other then backing up). During the song “The Fever”, we even find the band incorporating rip-off riff passages from a well-known Free song (sorry, memory fails me at this moment concerning the actual song), but at least the guys didn't copy the whole song's music! With only three instruments, each is almost equally important : even if the drummer obviously provides the foundation, the guitarist leaves spots to be filled by the bassist, which she does quite nicely. Somehow I prefer the songs with the bassist as lead singer. Not only does her voice come across better, but the songs she leads on also have some slightly more complex guitar play. Also, in one of the songs he leads (namely the EP opening “Into The Wake”) the male singer's voice is slightly over-the-top...well, a bit too high anyway! (All?) Songs off the EP can be found at the band's own website (www.) junkfoxx.com. They also have a facebook in case you wanna get in touch with 'em!

End conclusion : there's still room for improvement here! I suggest the male singer to try and stay away from the higher notes, or else refrain to backing vocals. Otherwise, quite a nice party band, I'm sure!