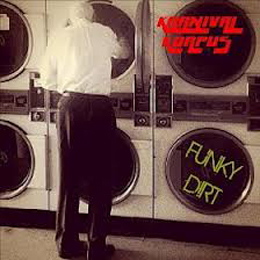 At Concrete Web headquarters this Trondheim based Norwegian band is hardly an unknown entity, seen as were allowed already to review the band's debut 2010 EP Midnight Creeper and 2011 debut full-length Whatever Comes Next (reviews by yours truly, posted 13/03/2011 and 10/02/2012 respectively).

With the songs on Funky Dirt the band very much simply continues in the same way as on the full-length, and as you can listen to all five of 'em at (http://) karnivalkorpus1.bandcamp, I'll not get too deep into describing the band's '60s-'70s Psychedelic-inspired Bluesey Hard Rock, which should also get fans among lovers of Stoner Rock. If you're looking for more material to listen to, I can recommend you try out the band's MySpace page (www.) myspace.com/karnivalkorpus. Looking for more info? Check the reviews mentioned earlier, or surf to (www.) karnivalkorpus.com.

Let's just state the obvious: these are fine musicians, proof given by the fact that band originator Einar plays and endorses Spector Bass, Euphonic Audio, Dark Horse Strings, and Armor Gold Cables. I mean, you don't get endorsements by being a lousy musician, you know!?