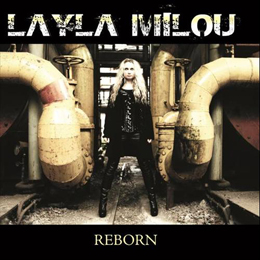 From the little info I was able to gather on the Internet (and from the info sheet that accompanied our promo copy of the new album), I was able to make out that Layla Milou was propelled upon the German music market as "The Next Rock Chick To Check Out" by the 7Hard label in Spring 2009.

Her debut album was launched in June of that year, and during 2010 over 30 gigs were played on festivals and in some of the major concert halls in Germany. The year was ended with the Dec 17 release of the remixes EP Happy, and somewhere in 2011, the label also released the 1-track single Mary's Boy Child, but otherwise things were strangely calm on the Layla Milou camp. In fact, so calm, that a lot of people started thinking she'd had her “15 minutes of fame”, and whomever had been caught up in the wake of relative success of the Rock Chick would have to look out for the Next Big Thing. Ach, we dó live in a consumer society, don't we!? But...unbeknownst to common people, but not to the label who helped to consolidate the aura of silence (because they wanted her to make a big “comeback”), miss Milou was working on the material for her sophomore album.

Eventually, she changed her production team to work with Rock Syndicate in order to give her new material a harder and rougher sound. Of course, this fell in well with the label, whom wanted to present the artist as having grown up, both lyrically, vocally, and as a person. With the help of co-producer/ co-mixer Sascha Schwung, a total of 11 new songs were written, arranged, recorded, and mixed. Now, I don't know what the live band situation for this young woman is like, but I'm very much under the impression that she does not work with a band of her own, but with hired musicians. On the new album, all bass and drums were played by Johnny Gee and T. White Jackson respectively, but as far as the guitars are concerned, things vary. For starters, for móst songs, the services of one Martin Behmerburg (guitarist of German Punk Rock outfit Silly Encores) were hired...and on móst songs he is coupled to Bjoern Donath (about whom no info what-so-ever is divulged). Exceptions are the duet ballad “Bloody Valentine”, on which àll guitars were played by one Thomas Burghof, the Power duet “Your Own Control”, which finds additional guitar licks played by Oliver Schwung, and “Disconnected”, on which Behmerburg, Donath, and Schwung get fortification from Aaron Goldberg (of LA based US act Army Of Freshmen). Now...I've already mentioned the duet songs...in order to make this “comeback” album even more extraordinary, guest vocalists Tony Martin (on the ballad; you know him, amongst others, from having had a tenure with Black Sabbath) and Paul DiAnno (on the Power duet; still my favourite Iron Maiden vocalist!) were attracted, and Layla herself enticed Jocke Skog (Clawfinger) to do a remix of the song “Access Denied”, for the album's pre-release remix EP by the same title, which was released on April 27 of last year (besides the album version and the aforementioned Clawfinger remix, there was also a Radio Edit – what for, I ask myself, seeing as the song is only 3:25 after all!? - and a Metal Mix).

If you ask me to give an honest opinion...I am not overly impressed! In all fairness, although Layla has a fairly stable voice, it is also somewhat limited in range, and on top, one doés hear a German accent in almost every song. Whether the German Rock Chick lover is gonna care a hoot, I very much doubt! After all, other female Rock artists with a similar speech impediment have become truly popular, even on an international scale. But what bugs me, personally, is that the production team got in a Punk Rock guitarist to play the rhythm guitar parts. I mean, in most of the songs, one can actually héar (and that's not exactly a feat, as his guitar is put up front in the mix on most songs) that Behmerburg is not exactly a Metal guitarist, you know...and I thought it was the intent to put this lady into that scene with this here album?

Oh well, as mentioned earlier, I am not overly impressed (love the duet songs though – there is, in fact, a third song that could be construed as a “duet”, as during “Sexy Race” Layla gets ample backings from an undisclosed male singer - and here's a funny detail : in the song “Disconnected” Layla herself uses the words “...I'm not impressed...”), and in an attempt to help you make up your own minds as to how to feel about this young lady's music, I can only suggest you check out (www.) myspace.com/laylamilou for 3 versions of “Access Denied”, and a song off the debut. For more audio material off the sophomore album, you will either have to make due with the 30-second samples normally provided by the trusted online sales sites, or go out to the record store to see whether you can get a listening session.