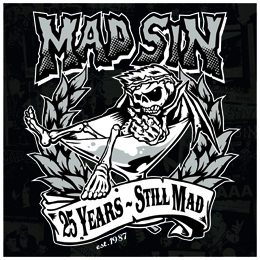 Mad Sin has been a benchmark for years in the punk rock scene, 25 years to be exactly. Well, not really in the punk rock scene, but rather in a subgenre, called psychobilly. Because of this 25th anniversary, a big birthday present was created as in a brand new live cd and dvd, called 25 Years-Still Mad. The entire thingy was recorded in their hometown Berlin.
With lots of passion, they draw you in their music. You don't even need the movie to hear that they still sound as raw, vicious and catchy as 25 years ago. Next to the live concert, the DVD also includes music videos, private movies and an interview.

Altogether Still Mad is a great addition to the Mad Sin collection of the big fans, but it's even a better purchase for those who aren't that familiar with the Germans.