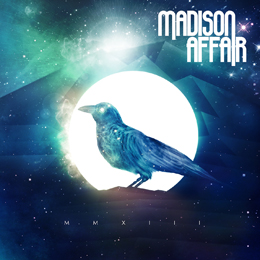 Nowadays, if you really want to discover some new bands, you really have to be open-minded. Lots of bands don't see the big deal when it comes to adding electronic elements to their music, such as keyboards. Madison Affair is no different and on their new 7", simply called MMXIII, they released four brand new songs which sound very brutal and bright at the same time. Just give the first song, Sound In My Head, a listen and you'll understand what I mean. The only thing that hasn't been taken care off that critically, are the passages from one point to another in the song. That sounds a bit cheap, but still they have got time enough to work that out on the full length, because musically, it all sounds very promising.

MMXIII turned out to be a great warm-up record for Madison Affair. For fans of Devil Sold His Soul, Texas In July and Bring Me The Horizon.