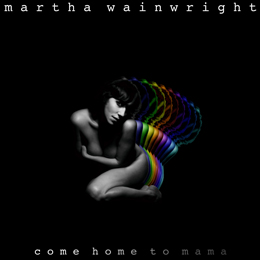 Born on May 8, 1976 as the daughter of Loudon Wainwright III (US Folk singer and actor) and Kate McGarrigle (Canadian Folk singer-songwriter), Martha Wainwright was raised into a musical family alongside her older brother Rufus Wainwright in Montreal (Quebec, Canada), and it was only a matter of time before she would put her own steps into the music business. Her first footsteps however, were of the modest kind, lending backing vocals to albums by her parents (she's featured on Kate And Anna McGarrigle's 1983 album Love Over And Over and on the 1996 album Matapédia; she did a duet with her father on the track “Father/ Daughter Dialogue”, featured on the 1995 album Grown Man).

Still, it wold take some time until she actually got into it. She recorded music of her own a first time for release on her 6-track 1997 cassette Ground Floor (2 songs off the tape were later to re-appear on her debut album, another songs resurfaced on the sophomore album), and started singing backup vocals for her brother soon after. The song “Year Of The Dragon” off that tape, appeared on The McGarricle Hour, the 1998 album by Kate And Anna McGarrigle, and in 1999 Martha released a self-titled 6-song EP. In 2001, she recorded the song “Star Crossed Lovers” with Propellerheads as a contribution to the Red Hot Organization's compilation album Red Hot + Indigo, not only a tribute to Duke Ellington, but also a fund-raiser for various charities devoted to increasing AIDS awareness and the fighting of the disease. When she had done her drama classes at Montreal's Concordia University, Martha moved to New York (the city), where she established herself as a singer and songwriter. Making contacts within the music industry (certainly facilitated by the fact of being “the daughter of”, you know...or, maybe not?), Martha started out lending her vocals as backing singer to albums by her brother, her mother and aunt, her father, and other artists including Jet Set Satallite, Linda Thompson, Gordon Gano, Rosalie Sorrels, Geoff Muldaur (whose band she became a member of for a short time) and Meanwhiles (for more details, also for stuff she contributed to before ànd after, check Martha's page on Wikipedia). In 2004, Martha contributed songs to soundtracks of two movies, one being The Aviator. Eventually, she finally started working on her self-titled 2005 full-length debut (issued through Canadian label MapleMusic Recordings) with producer Brad Albetta. Released in April, it was preceded in January of the same year by the 5-track EP Bloody Mother Fucking Asshole (which contained two songs that would resurface on the full-length debut), and followed up later the same year by the 5-track EP I Will Internalize (released in November, it contained 3 songs which appeared as bonus tracks on the debut album). In 2006, Martha recorded the song “Set The Fire To The Third Bar” with Snow Partol. Martha's debut full-length got her onto some of the bigger festivals, including 2007's Lollapalooza.

In May of 2007 Martha alongside her mother and her cousin Lily Lanken performed the songs “Golden Hair” and “See Emily Play” at the Syd Barrett memorial concert at London's Barbican Centre. That same year, Martha joined Annie Lennox and 22 female artists in a project to raise awareness for the transmission of HIV to unborn children in Africa. The resulting single “Sing” was released on December 1st (World AIDS Day), when Lennox performed at the Nelson Mandela 45554 concert in South Africa. Also in 2007,  Martha married Brad, and the latter would produce Martha's second album, 2008's I Know You're Married, But I've Got Feelings Too. The album, which had contributions from her brother, her mother and aunt, but also from The Who's Pete Townshend, Steely Dan's Donald Fagan and The Band's Garth Hudson, saw Martha expand her circle of influence outside the US and Canada, touring in Europe and Australia as well. As with the debut album, an EP followed in December, entitled iTunes Live From Montreal and containing 6 live versions of songs that appeared on he sophomore album. Oh...I would almost forget, besides helping out her brother a couple of time as a backing singer on tour, Martha also supported such esteemed artists as Cindy Lauper, Van Morrison, Neko Case, Snow Patrol, Pete Townshend and Sean Lennon (remember that one for later) over the years.

In 2009, during a Paris (France) performance, Martha recorded her live album Sans Fusils, Ni Souliers, à Paris: Martha Wainwright's Piaf Record (I have very little additional info on that recording, as I forgot to check further, but I suppose you people reading this understand that the album was a tribute to the celebrated French chansonière Edith Piaf!?). She also contributed backing vocals to a song on her father's 2009 album High Wide & Handsome: The Charlie Poole Project. That same year (on November 16), at London's University College Hospital, Martha gave birth to her son Ancangelo. In 2010, Martha lent her voice as backing singer to Hole's album Nobody's Daughter. But otherwize, things have been pretty quiet since the birth of her son. But, in the background, things were moving, and Martha apparently continued to write songs on her acoustic guitar.

When Martha set out to record the sensitive material she'd written (she'd borne a first child, and then lost her mother), she decided that this time it would need the touch of a female producer. So it's with Yuka C. Honda (Cabo???) that Martha retreated into Sean Lennon's NYCity home studio to record most of the material. Different methods were used. At one time Yuka would have Martha do her thing (performing the vocals in the closet which was used as the singing cabinet) and then construct the music around it (for that part was not quite finished), and at other times songs would be recorded “live” with the guesting musicians (Yuka and her husband and Wilco guitarist Nels Cline, drummer Jim White (of DirtyThree), Brad Albetta on bass, Thomas Bartlett (of Doveman) on keyboards, and Sean Lennon (no idea what he did, though). In the info sheet that came along with the promo download of the copy, Martha states that the album's lyrics have been a way for her to deal with her life's experiences so far...which is weird, because in one of the songs she sings about her husband cheating on her (perhaps her union with Albetta is not her first marriage?). One song sticks out, because it was nót written by Martha herself, but by her mother. I guess “Proserpina” can therefore be seen as an ultimate tribute of a daughter to her Mum...besides of which, the album's title is actually part of a sentence in that song! It is also one of the calmest, most introvert songs on the album, in which her otherwise very flexible and lively voice gets accompaniment only from piano and some sparse percussion.

But overall, the musical tendency on the album is of a Pop with varying instrumentation. Where electric guitar kicks in, it is usually quite delectable, but that doesn't mean the songs which are geared more towards the keyboards (or acoustic guitar) are therefore lesser. You see, with this artist, it's the vocals which are the most important, being, as mentioned before, overall very flexible and lively. Her voice is indeed very expressive, and I urge any fans of good Pop music to check out what's available on this artist in form of audio or video at (www.) marthawainwright.com (“Media” section only has a couple of videos) or (www.) myspace.com/marthawainwright (total of 10 songs, of which the aforementioned “Proserpina”, “Can You Believe It”, and “I Wanna Make An Arrest” are off the current album). If you're a man between 16 and 66 (or older), bee prepared to fall head over heels for this delightful voice (and besides, and I say this without any sexist intent, Martha's a delight to look at as well – and I ain't talking about the album cover photo either, you know!).  If everything went as planned Martha, with a new band, would have toured Europe in November of last year, and would be hitting the road in the US during early 2013.