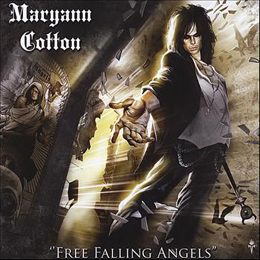 Mary Ann Cotton was an English woman convicted of murdering her children and believed to have murdered up to 21 people, mainly by arsenic poisoning. On Free Falling Angels the real angels are composer Jackie Patino, his father Hal Patino, guitarists Andy La Rocque and Pete Blakk and drummer Snowy Shaw.

On my first listen, I have to admit, I wasn't that impressed. I had heard a lot of hype, and quite frankly, I thought it had been misplaced. Sure, we had some well-executed glam metal, with strong Alice Cooper shock rock overtones, but it's nothing we haven't heard a million times before. It wasn't until my second spin, that I really began to notice the strong T-Rex groove going on underneath all the shredding guitar work by King Diamond axe masters Andy and Pete. This disc is not a revelation, or the best of its kind, but I can see it easily working its way into a semi regular rotation on my deck.