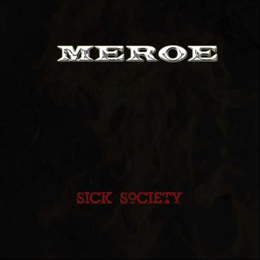 Hum...do you know, Meroë is an historical city on the right side of the river Nile, situated some 200 north from Karthoum, Sudan, and is known maily from the more than 200 piramids found on the West side of the town. The town was populated from around 800 BC to 350 AC, and was the capitol city of the Kingdom of Koesj for 7 centuries. The reason why the town was eventually abandoned, remains obscure, although there's speculation that the town was taken over by the Kingdom of Aksum around that time. Following the town's depopulation, the piramids were all plundered, and decayed to ruins. Some of the piramids have been restaured, and are today serving as a touristic attractions. But really, that is not what I'm supposed to talk about here!

Nay...the Meroe at hand here, is a Heavy Rock band from Munich, Germany, and was formed in the year 2000 by singer Oliver Monroe and bassist B.C. Sleaze. Current guitarist Alex K. joined in 2002, and soon after the album Zero was released. Following that, an apparent hiatus (no info available, although I won't exclude the possibility that the band did some occasional gigs during that period), and in 2009 the band returned with its sophomore album Midnight Kisses. However, in 2011 both B.C. Sleaze and the band's drummer left to work with Sara Sucks. Obviously, this set back progress for Meroe a little, but in Spring 2012 Oliver and Alex found a new rhythms section in bassist Andy and drummer Peter (as with Alex, I have no last names, but there's a possibility that Andy's family name is Lokotsch, as one A. Lokotsch co-wrote on one song on the album with Oliver – the rest all co-written by Oliver & Alex).

The music on this album is a Heavy Rock as one might have expected at the end of the '80s. Oliver has a slightly hoarse but mid-high ranging voice (which is not always quite flawless, but far more than passable), which is actually quite appealing to the ear, and Alex' guitar work is a nice combination of cathy riffed melodies with plenty of lead and occasional solo play. Weird detail about the album closing “Canadian Lady”, is what sounds like a female backing singer guesting (coùld be a man, but he'd have a strange voice, you know)...but no info in the booklet as to whom (s)he might be! To listen to some of the band's music, you might check  the "Music" section in the band's own site (www.) meroe.de, but these SoundCloud files are posted without song titles. For a couple (3 of the 11, in fact) of songs off the new album, and two more, go to the music setion at (www.) facebook.com/Meroe4U and (www.) myspace.com/meroemunich (two móre songs off the album). One song, a new version of the Zero album's "Angel" is available at both sides, and is a forewarning for an upciming EP entitled Suite 524, which will be out in Summer 2013. Also on that EP, will be a new version of Zero's "Baby I Will Follow You", and the band's cover of Kiss' "I Was Made For Loving You". Not kowing at this oment whether the EP will contain anything more, I nevertheless remain in antisipative mode, and hope the guys will be sending us the EP for a follow-up.