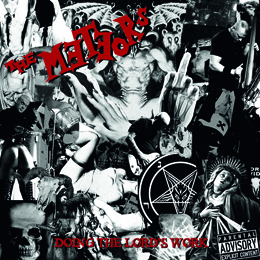 30 years and 40 albums later The Meteors haven't lost a bit of their uncompromising attitude and this new release contains the elements that have always made up The Meteors brand of "Pure Psychobilly".

The album is a typical The Meteors release with songs and tunes that could be perfect for an unmade 60′s B-Movie, full of snatched horror movie samples. Throughout the CD the songs are accompanied by a well slapped bass hog which allows Fenech’s familiar vocal yelps to scythe through that twanging guitar. Somewhere past the middle of the album there's a little dip in sound of the finished tracks but still the last few songs are closing nicely.

One nice treat is the Black Sabbath cover of Paranoid and it must be said they did a good job to adapt it to their own sound.

It would be unfair to say this is a bad album because it is not renewing or modern, no it's the style they chose and therefor this album is mostly a discovery for new listeners and a good addition for fans.