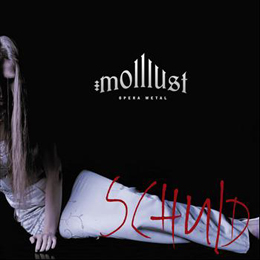 From Leipzig, Germany, comes a relatively young band playing what they call "Opera Metal". So, what is the possibly interested party to understand by that statement? In short (they elucidate on the matter somewhat on their website, explaining things to greater detail), Opera Metal, as seen by molllust (written with a small "m" on purpose) is a perfect blend of Opera and Metal elements. Arrangement styles of both genres are intertwined, both electrified and classical instruments are used and, with drum and bass as the foundation rhythmic elements, all other instruments have both rhythmic ànd lead parts. Last, but certainly not least, Classical type vocals are used! The foundation of the band was laid down in early 2010 by Janica Gross (female vocals & piano) and Frank Schumacher (guitar & male vocals), people from usually opposite sides of the musical spectrum, who nevertheless found compelling attraction in the respective opposite sides.

You see, Janika, born in the North of Germany, has been playing the piano since she was 10. During her school years she not took Classical training, and not only played in her school's orchestra but also competed 4 times in the Jugend musiziert event, 3 times as a soloist, the 4th time in a 4-hand piano setting. In all 4 competitions, she took home regional first prizes, and as a soloist she once took home a 3rd National prize. Until 2003, the singing had been secondary to playing the piano, although she had frequently used her then still untrained voice during the schools musical performances and singing in a Gospel choir. But in 2003, when she entered Leipzig's University choir, she started taking private vocal lessons, and in 2007 started following Classical Master Singing courses. Besides her work in molllust, she's also active as a freelance soprano. Fascinated in the idea of mixing Classical Music with Metal, she started writing her first arrangements in 2005, and decided to go in search of the appropriate musicians halfway 2009.

Fate would have the ambitious singer/ pianist stumble across Frank's path somewhere late that same year, and he would let himself be entranced by her enthusiasm, as it seemed very much the answer to the querry he was on himself, looking for something "different" to do. You see, Frank was born into a musical family, his father a member of a couple of popular bands, including Karussell. Still, he was to be geared towards the heavier Metal genres, as influences from the likes of Sandow, Tool and Alice In Chains would lead him into the Grunge Rock act Lost Innocence. As the band's frontman, he wrote songs, played the guitar, and sang as well, for the next 10 years (during which several live performances and a couple of studio recordings were done), but then gradually started to feel an itch for a change.

His incidental meeting up with Janika was just what he needed and so, in January of 2010, the duo started this band in its first line-up of singers, pianist, lead guitar, rhythm guitar, and bass (in essence, that meant a bassist joined the original duo). In October of the same year, Lisa Hellner joined in on the cello. In the course of the year that followed, line-up changes came with the addition of drummer Daniel Wölfer and the taking over of bass duties by Johannes Hank in early 2011, and the band made its first demo recordings. Then, in November 2011, Sandrine Bisenius joined the band on the (electric) violin, and thus completed the first stage line-up of the band. A first show was done in December 2011, but then the drummer's duties were taken over, ad interim, in January 2012, by Ronny Garz. The newcomer may have had a tough job adjusting into the band, as at the end of the same month of his entry in the band a start was initiated for the recordings of this album at Leipzig's Echolux/kicktheflame studios, under guidance of recording engineer/ producer Andy Schmidt. Before the physical release of the album, Garz was replaced (in July) by new drummer Tomasso Soru, whom the band imported from Italy (more details on his antecedents, as of the other band members, can be found on the band's website). Somewhere between things, the band also participated to the BachSpielen 2012, where the band's covers of Bach music won 'em the first prize from a professional jury. For that event, Sandrine's role was taken over by one Luisa Bauer. A 4-track EP entitled Bach Con Fuoco, would be released on March 17 of last.

Returning to the debut full-length's material, I have to say that the underneath complexity, which comes from having the several instrumentalists changes their role from rhythmic to lead, has greatly pleased me. In contrast to my ideas on Operatic vocality, the focus within molllust lays clearly on the female vocals, with Janika singing in all songs, and Frank (with a voice adapted to a Classical type of singing) actually put in the role of performing a foursome of duets, in the second part of the album (there's also some backing "vocals" he does, and a short intro). No "modern" type of "singing" in the form of growls, not even as a background! For the album, by the way, molllust hired the services of an extra cellist and violinist (but failed to mention in the booklet on which songs). I can't say I like what I hear àll the time! Here's songs on which Janika takes on those excessively high notes sopranos are occasionally capable of reaching...and that's where she loses me! Weirdly enough, there's also moments where Janika is clearly backed (vocally, that is) by another woman...or would that be overdubs?

To find out how yoù feel about molllust, go to the "Medien" section of the band's website (www.) molllust.com (the .de wa recently converted), where you can listen to snippets of all of the album's songs, and to a sampler of the Bach covers EP. There's also a couple of live videos to be viewed, by the way. However, if you're wanting to hear full-length versions of some of the album's studio recordings, surf to (www.) myspace.com/mollust. It so happens that the 3 tracks posted there are vocal solos for Janika, so they give an incomplete image of what the band stands for. Still...enjoy!