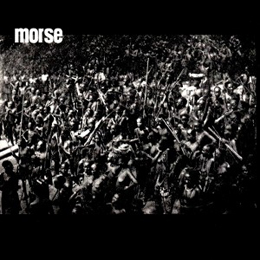 Do not mistake this French band for any of the other acts by the same name, in fact, do also not mistake this band from the Montpellier region with the one from Lyon, who play a Wave version of a Black Metal and Punk hybrid.

With members now living in Montpellier, Villefeyrac, and Calvisson (respectively 25 km WSW and 30 km ENE from Montpellier), this Morse was founded as an instrumental Post-Rock/ Noise trio in the Spring of 2008 (May?) by drummer Kévin Franco, guitarist Mathieu Lamblé, and original bassist Sylvain. Sometime later the trio decided to go vocal as well, and recruited Breathe Your Dirt screamer Jean-Marc Garcia, completely dispelling their former material except for one track (“You're Already Dead”, available on this here cr-R, yet in a totally adrenalized version compared to the old one). Within a couple of months however, the quartet had written a new set of songs, alternating fast and aggressive parts against more massive and rhythmic ones, which bordered the Doom realm. Regretfully, the bassist developed an abusive drinking problem, and was therefore asked to go! Then, in Spring 2009, one Abel Gibert (formerly vocalist of the band Spinning Head, and currently the CEO of Head Records) offered to step in as a replacement. Following rehearsals of the old songs, and writing sessions for new ones, the band finally did its debut gig on November 25 (hey...my birthday!) of 2009, playing support to none less than Keelhaul!

Expect somewhat dissonant guitar play, shouted/ screamed vocals, and an awkward resemblance to such genre-defining bands as Botch and early Converge. With the exception of one track, the overall calmer “Discontinuous Circumpolar Distribution” (which has a length of almost 4 minutes) the songs are short, making for just over 10 minutes' worth of listening pleasure in 5 songs, the 4 non-mentioned tracks indeed being a little more up-pace, and displaying that wonderful Mathcore sound of the aforementioned bands. For some audio of the band, check (www.) myspace.com/tapecodemorse, where you can find the EP's songs “Odobenus Rosmanus”, “Daycare For Bastards” and “Mugiform”. This ought to be released on vinyl...why not a 33 rpm 7-inch? ...and another favorite band is added to my year-lists!