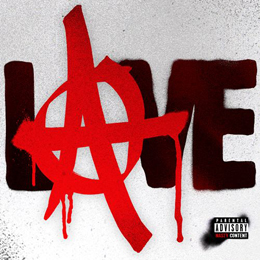 Seeing as Goodlife Recordings neglected to put us in their mailing list when they sent out copies of this Belgian Hardcore band's July 2010 album Give A Shit (their 2nd on the label, following official full-length debut Declaring War – and two earlier demos), the review yours truly did on the album Aggression (posted 17/04/2008) is the most recent info we have on the guys on this here website.

Well, you now know that there wàs a third album, and with their 4th, the prettily titled Love, the quartet returns with a changed line-up, at least as compared to the 2008 album. Or the only remaining member is singer Matthias Tarnath, whom now sees himself surrounded with guitarist Chris, bassist Berri (most recent addition) and drummer Nash. But, besides the line-up, nothing changed to the musical concept of Nasty, which was and is still, to make “...fucked up music for a fucked up world”.

Although containing 14 tracks, the average track length is a mere 90 seconds, a feat succeeded at through the insertion of 3 short “skit” passages, and a couple of short-sharp-shock type of songs. In fact, only 4 songs on the album exceed a length of 2:25! In essence, the short-sharp-shock tactics is what's to be expected from this quartet, the Hardcore effectively enhanced with some Extreme Metal elements to make for a more melodic and effectively aggressive whole! As on Aggression, the band made use of some guests to enhance the attraction factor of their material, Tito of Belgian Beatdown Hardcore act Surge Of Fury returning to enhance the song “Fake Smile” with his vocals. Craig Chaney (guitarist/ second singer of Evergreen Terrace) contributes to the album's title track with a nice clean vocals part. On other songs Matthias finds himself occasionally supported with great “gang” vocals, and in occasional instants there's also vocal samples added to songs. A mere 21 minutes may seem very little for a full-length album, but Nasty doés fill that time with enough aggression to last one who's come in contact with it two times in a row for the rest of the day.

With no music of the album available on either (www.) facebook.com/getnasty or (www.) myspace.com/getnasty, you will have to make due with the older songs posted there to make your acquaintance with this extremely violent act, or seek out whether the album has a page on one of your trusted online sales websites (they usually provide 30-second samples of at least some songs, or all). The alternative would be that you go out to get a listening session of the album the album at your local record store, or go to one of the band's concerts. Regretfully, they've just finished a tour which took 'em through Germany, The Czech republic, Holland, end even Belgium. Dates still coming up can be found at the band's facebook. Meanwhile, by all means, consider the album as part of my personal “Best Albums Of 2013” lists!