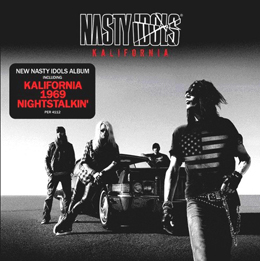 No newbees to yours truly, this Swedish Glam Rock/ Metal act, as I reviewed the quartet's comeback and previous album Boys Town. For a history of the band, I refer you to that review, posted 28/03/2009, and still available in the “Archive” section of this here website.

According to the band's page on Wikipedia, Boys Town was given a warm reception by its Swedish fans, and by a portion of the media who still knew about the band outside Sweden. Following the promotional hum-drum around the comeback album, the band (still consisting of the quartet of lead singer Andy Pierce, lead guitarist Peter Espinoza, bassist Dick Qwafort, and drummer Rikki Dahl...whom joined at the 2006 re-union), the guys took some time out in 2010, and later in the years started composing new songs for their current album, which they had originally hoped to get released in late 2011. However, their label then went belly-up, and it therefore took the band some extra time to find a new one. Eventually, Perris came along to save the day!

As on their previous album, Nasty Idols alternate adrenalin-driven faster-played Glam tunes with some calmer, more intimate tracks...and they also again bring a calmer track with organ in it. In fact, as far as the organ sound during the album closing track “Since You U Been Gone” is concerned, I am very much reminded to Procol Harum's 1967 hit song“ A Whiter Shade Of Pale”. To get people acquainted with their “normal” type of music, the band has posted 4 songs off the new album at (www.) myspace.com/thenastyidols. Get down and get with it, or turn around and get out of the door!