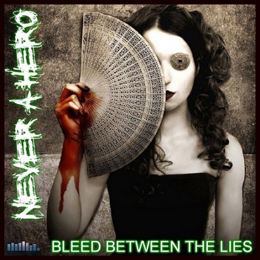 This “Rock/ Alternative”band from Sudbury in Suffolk (South-East England) is said to have been formed in 2009, when members of 2 local bands merged together to write something entirely different from their and the current Rock market's usual style. When we browse through the band members' bios (available at (www.) neverahero.net for further details), we find the story was slightly more complicated than that!

If I'm not mistaken, the local bands mentioned above would have been It's Not You, It's Me (once known as Nocternal Emissions, that band issued 2 self-released EPs, and provided drummer/ samples provider Daisy and guitarist/ backing singer Mickey) and Milqud (no additional info available, except for the fact that it brought in members KB on bass and backing vocals, and Kaji for lead guitar and backing vocal duties). The point being, that Kaji only came into the fold at a later moment, replacing original lead guitarist/ backing singer Toby C., and also...current lead singer Phrixus came into the band after answering to an ad. But, those little details set aside, the most important thing I learned from the band members' individual bios, is that all of 'em started out at a young age...which immediately explained to me the highly professional sound I heard on the album! You see, as an added bonus, the lead singer also has a degree in sound engineering and, really...it helps when you've got someone in the band whom knows how to record the sound a band is looking for!

In 2010 the band recorded its debut EP Socially Awkward at Reading's Outhouse Studio, and although it only had limited self-release and distribution, was rewarded with critical acclaim by both the fans and press media, as well as by some important music business people (but that did not exactly lead to any recordings deals, as you may have gathered). Nevertheless, in mid December 2011 NaH signed a deal with American label Cinderella Records, for the global distribution of their EP during 2012.  Meanwhile, on the live front, NaH were making a name for themselves, having started off on a local base first. In 2011, the band partook in the Redbull Bedroom Jam competition, and were the first band to be voted to play by the fans. Throughout the year, the band played several shows, which culminated in a support slot with Wolfsbane in December. January 2012 saw the band completing its first full UK headlining tour, and since then they have played at a variety of festivals as well as several renowned venues (various 02 academies, the Camden Crawl, and London's legendary Garage). Along the way, music clips were released for the EP's songs, and were given airplay through Skuzz TV and Kerrang!TV in the UK, as well as other music TV channels across the globe. A certain growing curiosity in the band was certainly awoken by the fact that the guys perform with face masks...very much like Crimson Glory used to do.

Having recorded their full-length during 2011, the band took its time releasing the album only towards the end of 2012. And in a way, that was very sound “commercial” thinking! The band had, after all, just signed a distribution deal for their EP. Also, it was sound thinking to issue a single (with music clip) from the album first...which the band did with the release of “Burning Skies” on July 2nd. The video (starring UT TV soap legend Bruce Jones akà Les Battersby) was again picked up by a variety of national and international music TV channels, and gave the band the extra confidence in releasing the album on their own, as proper interest from the music industry was failing!

The first thought that goes through one's mind when reading that while listening to the band's music is, quite simply : “How is it possible that these guys do nót have a deal yet?”! I mean, as the band puts it herself, musical influences range from Classical to Metal and from Dubstep to Rock, but the level of musicality, both instrumentally as well as vocally, is simply unheard of in current-day unsigned bands! With the drummer as well as guitarist Mickey being prolific keyboard players, the sounds on the keyboards, when being let into a particular song, vary from classical piano to “ordinary” keyboard, and from orchestrated to synthetic (and sometimes a mix), but at any instance the tunes are...emotionally moving! On top of which comes the great double guitar play...occasionally acoustic, when the sounds get electrified there's always one end in the guitar spectrum which will be playing very melodically and, again, emotionally laden. The icing on the cake comes with the vocal department, in which the lead singer remains withing the clean category, and backing singers either come as harmonizers, or as more aggressive counterbalance (but the latter only in short bouts). Very occasionally also, the backings come in the form of “gang” vocals! Of course, some songs will have more driven vocals overall, because of the pace of the song (take “Vogue”, for instance).

Now, I could go on looking for the proper words to put down the genius of this band (God knows, I've been running circles in my living room and kitchen for more than half an hour in order to clear my mind for the previous paragraph!), but I guess it's better to let this come to a short sweet ending, by letting you know that videos by the band can be viewed at their own website (mentioned above), audio (but only of the track “Burning Skies” as far as the full-length is concerned) is found at (www.) myspace.com/neveraheroofficial. Oh, before I forget: the album has one guest performance, with one Heidi Stubbings bringing some sparse female vocals to the song “Untouchable”. Last item, as far as I'm concerned: add this album to my personal “Best Albums Of 2012” lists!