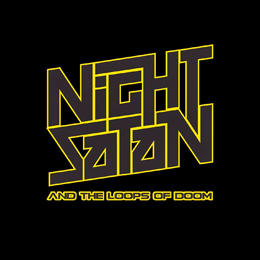 Gosh...the weird stuff we sometimes get to review at ConcreteWeb! Hailing from Turku (a city some 160 km removed from Finland's capitol Helsinki in the western direction) comes the synthesizer trio of Wolf Rami (synths), Mazathoth (additional synths) and Inhalator 2 (electronic drum pads)...better known as Nightsatan.

Wolf Rami's original concept about Nightsatan's music (whom claims inspirations from Italian '80s post-apocalyptic movies), was to create a “soundtrack to Miami Vice meets Heavy Metal” sound (yeah, I know: weird uh, with none of the musicians a guitarist!?), and during the band's career its music broadened out to both ends of that spectrum, with the Synth Metal riffs of the early material giving way to a more progressive and atmospheric approach. In 2010 the guys released its debut album Midnight Laser Warrior, and this already quite cinematic album gained the band an international cult fame which far exceeded the vinyl release's sales, plus its first shows outside their native Finland, into Sweden!

For the band it was then only a natural step to ally themselves to a movie soundtrack and, why not one in which they were featured themselves as their alter egos, and giving tribute to the movie genre which inspired the band's music in the first place? So, henceforth the short flick (it's only 24 minutes in length) Nightsatan And The Loops Of Doom was shot on a script by CHRZU, whom also directed the film. Don't expect too much from the story line: set in a post-apocalyptic era in the future, the scarce people left are scattered in small parties across the globe, and revert to cannibalism when the occasion arises. To keep from goin' insane, they play music, and occasionally also use that as a weapon...as seen in the movie. I won't tell anything more about the story details, except that there's also a man-want-female to make romantic love with...and in the end the dude (in this case Inhalator 2) actually gets his girl...but whether it's actually a happy ending, that remains to be seen! Hum, one last thing about the movie: the texts were synchronized into Italian, which makes for some occasional wacky mouth-work on behalf of the actors (a mere 5 more outside the band)

Although the movie only lasts 24 minutes, the soundtrack actually lasts just over 47...as it features the full-length songs (the movie only containing samples of most of 'em). Most of the material is instrumental (except in the few exception where where parts of the conversation in the movie was edited into the music) and synth-driven (the exceptions being “Secret Of The Mystery”, in which an actual electric guitar is featured; and “Rejects Of The Wasteland”, which at least sounds like heavy guitar riffs are used). Apparently the band made use of several guest musicians...but they totally forgot to have that mentioned in the info sheet that came with the download promo of the album. At any rate, they bring a quite diverse sound, going from menacing to downright romantic. To get acquainted with the album, surf to its BandCamp page [address to be found at (www.) facebook.com/pages/Nightsatan-and-the-Loops-of-Doom/1379927565573874). By the way, the album comes as a CD, accompanied by the DVD of the movie!

Nice idea, that, but you'll probably find more fun in listening to the album, than in viewing the movie. Then again, having seen the movie greatly increases the listening pleasure, you know!