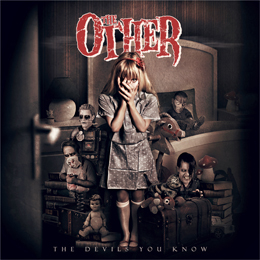 Since the release of their previous album (review by yours truly posted 05/06/2010 – still available in this website's archives files), Germany's prime Horror Punk act The Other went through some changes, introducing Viktor Sharp into their line-up as their new bassist.

This highly qualified musician, whom is also an accomplished guitarist, songwriter and arranger, not only brought a wealth of new ideas to the band in support of those put forward by singer Rod Usher and guitarist Sarge von Rock, but also brought a confidence to the band which caused 'em to finally create an actual ballad (with the album closing “Ewigkeit”). The melody for the song had apparently been buzzing around in Usher's mind since the band's 2006 sophomore album We Are Who We Eat, but the band had never found a good concept for it...until Viktor fell into the equation! However, do not be afraid that The Other may have ventured into Pop territories...”Ewigkeit” (with German lyrics, as one might deduct from the song's title) may contain some strings (or string keyboards?), and have some calmer vocal and guitar parts, but the songs still carries the band's typical heavy guitars as well! As does the rest of the album, by the way! Classy guitar licks with instantly recognizable melodies, and lyrics with harmoniously backed clean vocals which invite to massive sing-alongs. Personally, I've always found the Horror Punk tag to this band a bit weird, as the band's sound certainly excels the ordinary Punk idiom. In fact, the band itself have confessed incorporating elements from other genres into their music quite willingly...and of course the Misfits comparison still holds somewhat, even if that band was never as catchy as The Other!

At the same time as the album's release (note that both the double LP and download versions are enhanced with the inclusion of bonus track “The Walking Dead”) the band also celebrates the release of the sequel to their 2006 comic book Tales From The Other. The 40-page The Other – Der Fluch des Kultes was drawn by Schwarzwel (worked with Die Ärtze before), has a preface written by movie icon Jörg Buttgereit, and is released through Panini (yep, the manufacturer of football stickers & trading cards, but also of Marvel, DC, Star Wars and Simpsons comics, as well as comic adaptations of Stephen King novels). A little extra for the absolute The Other fan, but also a wanna have for any comic book fanatic.

Getting back to what matters most here, namely the music, I have to say that The Other are truly the top of their genre, and therefore The Devils You Know more than deserves my maximum appreciation rating!