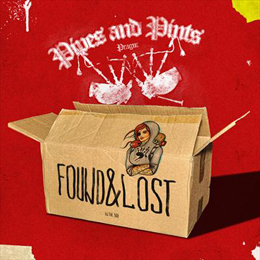 Although all the band members in celtic punk band Pipes And Pints look like tough guys, they still know how to include the beautiful sound of the bagpipes in their music. You might think that they are from Scotland, but actually, they are from the beautiful city of Prague. Found And Lost is their second full-length. Their first one, Until We Die, was released through the European label Wolverine Records, but already it got released overseas in the USA and even South America. The success of their debut took their singles such as Until We Die to Japan and even Australia.
By all this success, they got under the radar of one of the biggest punk labels, People Like You Records, who released their second studio album, Found And Lost. This album contains eleven punk songs that are more than decent. It opens up with a solo of the bagpipes, setting the tone for the other ten songs about drinking and partying to come.

Fans of Dropkick Murphys and Real McKenzies should definitely check out Pipes And Pints. These guys know how to shred their bagpipes.