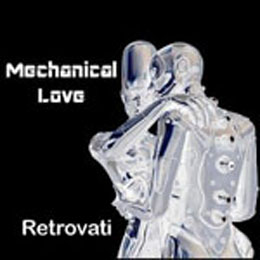 Far from being one-sided, Jose has a broad experience in music which goes from playing everything from Jazz, to Blues, to Progressive and Industrial Rock, and to composing soundtracks for just about every type of media. In 2006, Jose decided to start making music on his own, creating sounds (he does not use vocals) which would not be limited by any one genre or sub-genre under the monicker of Retrovati. As far as I know, he released a first full-length album entitled Metalurgyka in 2008. In 2010 followed a new set of songs, but I'm not sure whether they were released on a disc, or just put out on the project's MySpace (www.) myspace.com/nishmah to benefit anyone into his music.

Mechanical Love is the project's latest recording, well, actually it's the first part of a two-part set, this first one including 5 tracks with a length ranging between 2:55 (the EP-opening “The Holy”) to 6:47 (the album's centerpiece “Pensiamento”) for a 23 ½ minutes worth of listening pleasure. Think Joe Satriani with more elaborate keyboards, occasionally giving more attention to the latter, than to the electric guitar. Occasionally you'll find passages closer at home in the world of Jazz, then you'll swear to be listening to a movie's soundtrack (without added background sounds from the actors or surroundings). However, in spite of the fact that a certain underlaying complexity (using odd time signatures and counter-rhythms) IS present (which will be to the greatest pleasure of the Prog fans), there is also a very high listenability factor. The most amazing thing is that the tracks were composed after entering the studio, with some of 'em even recorded in one track...kinda like pulling the “let creativity catch you while you are working” axiom to the extreme, but with the greatest of results. Without a doubt, my favourite release in this here batch.

Find full-length versions of two tracks on the EP (alongside 4 tracks from a 2010 recording session) at the above mentioned MySpace, and samples of the rest via (www.) retrovati.com. As we speak, the second part of the EP might already be mixed, possibly even ready for release...and I for one sure hope Jose thinks of sending us a copy of the new material! For the time being, let's give this EP a maximum score!