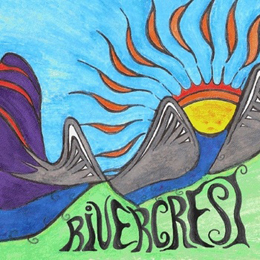 A very hypnotic and spacey groove begins the opening track as it builds and the mystery of the “SjangoDjango Kutikuti” slowly begins to unfold. The opener is a splendid example of a powerful repetitive riffing totem mantra.There are sounds here that would find their way into the emerging fields of jazz, prog and kraut rock with waves of sounds, looping noises, uplifting percussion and that drifting loose guitar-sax-key groove that would come to characterize Soft Machine, Amon Duul, Mushroom and John Coltrane. "Alles boom" is an intensely frantic tune with all musicians ripping up their instruments amidst the most controlled of chaos. “Deleylines” consists of (un)classic Rivercrest with pounding drone rhythms that set the pace for a jam of 40 minutes. But like most longer tracks there are quieter spacey ambient segments, and on this track they have a gorgeous flowing space and jazzy bitches brew quality that smoothly mixes both the spacey krautrock and avant-rock sides of the band.. Things slow down after a while as the music winds down into a more introspective, but still experimental wave-finale. Rivercrest is clearly a band that communicates well among themselves and it's important to keep in mind that nearly all the music on this disc is improvised.

These tracks were all recorded at one day session, and present Rivercrest at their best in an environment (The Loft) that definitely suits them.

The album totals about 72 minutes and while there's a bit of gratuitous noodling and raw material here which might have been more refined, it still does well at keeping its edge at most times. So here you have it, there are many sides to Rivercrest and when I'm in the mood they are second to none for the ultimate freak-out experience. Love the bright colourful artwork too.