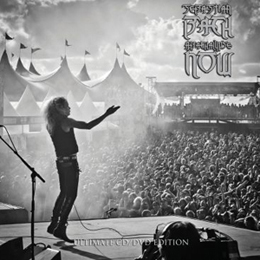 I can’t tell you anything about the DVD version, but here’s my review of the CD.

To start of with, this is the first solo live CD Sebastian Bach has ever released.  It contains footage from 2012’s Hellfest, whereas the DVD also contains footages from 2012 Graspop Metal Meeting in Belgium, and finally some tracks from the Nokia show I Los Angeles.  On the DVD version there are also 3 bonus music videos. The tracks themselves are a mix of Bach’s own work as well as some of Skid Row’s classic tracks. The quality of the recordings varies a lot.  At times I find the sound real bad, but that’s not the case for the whole Daily the set list of the two shows featured on the CD are almost identical. For someone who isn’t that much into live CD’s however, this seems a bit too much of the same, especially if you buy the full deluxe edition containing the CD’s as well as the DVD’s.