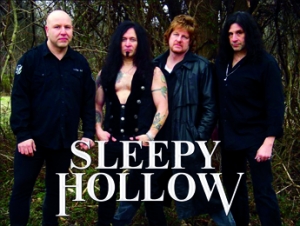 It all began in 1989 for Sleepy Hollow. The band was formed in New Jersey by Dan Castiel and Joe Dell. After a short jam they decided they should put a band together and release their musical potential out to the air. Frank Melick came to the band and after a short audition he got the drummer role. Matt Schwartz entered the band and amazed them by his guitar playing. The band started to perform and soon they were asked to take a part in several Metal concerts. After several changes in the original line up, and after a self-titled debut, the band released their new album “Skull 13”.

The first thing that I noticed from listening is the unique voice of Bob Mitchell that reminded me an extreme version of Udo. This band got their own style, it's something between a dark atmosphere to heavy metal.